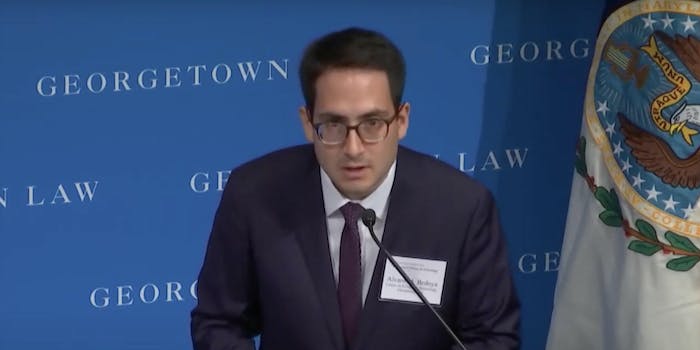 Alvaro Bedoya is an outspoken opponent of big tech.

The Senate today voted to move out of committee the nomination of an outspoken opponent of facial recognition to the Federal Trade Commission (FTC).

Bedoya’s nomination still needs to be approved by the full Senate. The Senate Commerce Committee voted 14-14 on Bedoya’s nomination. Because of the tie, a full Senate vote was required to move it out of committee. Given that Democrats were able to discharge the nomination, it’s likely Bedoya will eventually be confirmed when a vote officially happens. They will likely need Harris to cast a tie-breaking vote again.

Although both Democrats and Republicans seem to agree that big tech needs government oversight, which the FTC is tasked with enforcing, they’ve differed on the mechanisms and style of enforcement, making Bedoya’s nomination a somewhat contentious battle.

Biden previously nominated Lina Khan, an outspoken anti-monopoly advocate, to the commission, then picked her to be his chair.

Bedoya was a founding director of the Center on Privacy & Technology at Georgetown Law, which focuses on privacy concerns of and overreach by the big tech giants. He has called digital data and privacy rights the new civil rights, and long advocated for regulations against the use of facial recognition technology.

In attempting to fill out his FTC, Biden is arming the agency to continue its pursuit of antitrust action against the big tech giants. The FTC recently refiled its suit against Meta, formerly Facebook, alleging the tech giant is an anti-competitive monopoly.

Bedoya isn’t the only contentious tech-related confirmation fight of the Biden presidency. Federal Communications Committee nominee Gigi Sohn struggled to get past Republican opposition in the committee, and still awaits a full Senate vote.