The alt-right subreddit inflated its subscriber count by 7 million

It's a simple trick.

It’s the self-described Reddit hub of the alt-right and boasts an enormous subscriber base of over 7 million with hundreds of thousands of visitors every day.

However, a closer look at the page has proven that the opposite is true:

The alt-right community on Reddit is apparently 1,000 times smaller than it claims to be. Close inspection of the page elements reveals that the scripted content has been manipulated to inflate the numbers.

Where a script element usually reads “subscribers,” alt-right page moderators have modified the text to begin with three zeroes which subsequently tag onto the end of the actual subscriber count as a suffix:

These extra zeroes misleadingly up /r/altright’s subscriber count by millions.

The same misleading trick is implemented on the number below, representing the number of users currently looking at the subreddit: 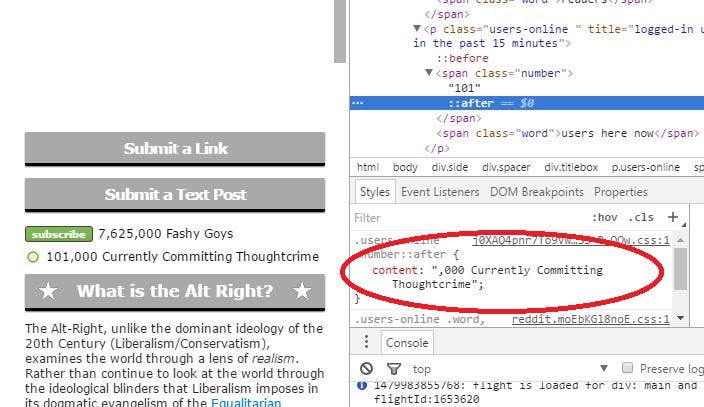 Given that disinformation has been a critical strategy for this movement of anarchic meme mongers and Nazi lurkers, the revelation may seem quite fitting. Inflating the size of a group on a popular platform like Reddit, however, deviously serves to produce an over-generalized sense of agreement that does not exist. In psychology this effect is called the false-consensus bias, wherein users believe fringe far-right beliefs, in this instance, to be more widely accepted and thus more normal than they really are.

As Facebook looks at its own fake news problem and Twitter bans alt-right accounts en masse, it’s uncertain how Reddit would respond to this deliberately deceptive subreddit sidebar. Last week the company actually promoted /r/altright when it was featured as subreddit of the day. Almost immediately redditors reacted with anger, forcing CEO Steve Huffman to apologize and distance his platform from the volunteers that selected /r/altright for promotion.

The website management has taken strong action against false information in the past, most recently banning a subreddit discussing a fake news story that alleged child abuse committed by members of the Clinton campaign.

The Daily Dot has not received a response from Reddit about the inflated numbers from its moderators.