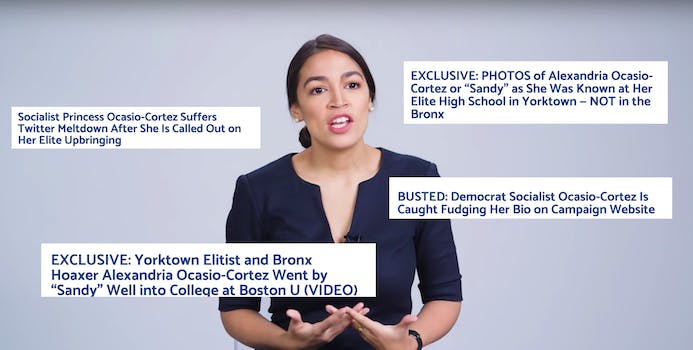 One site can't get the congresswoman out of its head.

Late Sunday night, the Gateway Pundit dropped the kind of exclusive story that reporters always dream about, a scoop so shocking it halts the internet as everyone pivots to talk about the previously unknown news.

Rep. Alexandria Ocasio-Cortez (D-N.Y.), the current darling of the left-wing, was called Sandy back in the day, and used that nickname through college, according to the conservative news outlet.

Wild. And much like any great scoop, this was built on the backs of the site’s previous reporting. It was the Gateway Pundit that first broke the story last week that Ocasio-Cortez went by the name “Sandy” in high school.

“EXCLUSIVE: PHOTOS of Alexandria Ocasio-Cortez or “Sandy” as She Was Known at Her Elite High School in Yorktown — NOT in the Bronx.”

“Alexandria went by “Sandy” at her affluent high school,” the outlet reported. That gem came from a motivated source, who the Gateway Pundit wrote “does not like ‘Sandy’s’ politics and DOES NOT WANT TO LIVE UNDER COMMUNIST – SOCIALIST rule.”

The hoax the Gateway Pundit revealed—that as she got older, Ocasio-Cortez preferred her full name to a nickname—stems from a tweet the congresswoman posted of her plaque at the Capitol, where she said she’s still “Alex from the Bronx.”

B.S., they claim. People once called her “Sandy.” Because while the left-wing mainstream media has been fawning incessantly over Ocasio-Cortez and her meteoric rise to the forefront of political conversation, conservatives have been pushing back.

The Gateway Pundit—which has a history of pushing false conspiracies and out-and-out lies—has been leading the charge. The outlet has made it its goal to ensure the world is informed about her.

Here are some of the Gateway Pundit’s biggest scoops about the congresswoman since she won her primary in summer 2018.

In December, the president’s favorite meme teen Donald Trump Jr. posted to Instagram about Ocasio-Cortez and his father, saying that the progressive ideas pushed by Ocasio-Cortez would lead to Americans eating their dogs to survive. The then-congresswoman-elect responded,  saying it was “definitely a ‘very, very large brain’ idea to troll a member of a body that will have subpoena power in a month.”

According to Jim Hoft, who runs the Gateway Pundit, that was a “CRIMINAL ACT.”

“It appears Ocasio-Cortez broke federal law by threatening a US citizen with retaliation for snarky tweets,” Hoft wrote. “You can’t use the power of the law to get back at people for their Instagram memes, Alexandria!”

Hoft went on to cite a statute that doesn’t really say Ocasio-Cortez violated federal law. Rather, the law says that people have the right to sue the government if they are deprived of constitutional rights, which it not something Ocasio-Cortez was doing.

After another news organization noticed changes to Ocasio-Cortez’s official bio, the Gateway Pundit reblogged the news. It’s a legitimate gripe given the circumstances, except that the site then started passing it off as its own while lobbing other made-up accusations.

The original passage on her site mentioned how Ocasio-Cortez “ended up attending public school 40 minutes north in Yorktown, and much of her life was defined by the 40-minute commute between school and her family in the Bronx.”

She amended that after her victory, when someone tracked down her parent’s house to prove that she attended high school in the suburbs. The new passage said: “She ended up attending public school in Yorktown—40 minutes north of her birthplace. As a result, much of her early life was spent in transit between her tight-knit extended family in the Bronx and her daily student life.”

“[After] she got caught,” the Gateway Pundit added, “the Socialist Democrat changed her bio to reflect that she was not commuting 40 minutes a day which was a complete lie.”

Her bio never said anything about a daily commute before or after it was changed.

As part of their reporting on Plaque-ghazi, the Gateway Pundit published an article about two of her tweets.

Yep. As everyone knows, I grew up between two worlds + experienced 1st hand how a child’s zip code can shape their destiny.

It was scrubbing those households’ toilets w/ my mother that I saw and breathed income inequality.

I decided to make a difference.
You decide to do this. https://t.co/kMtbGQo8o8

The tweets were described as “lashing out.”

In the wake of the Senate’s disastrous Brett Kavanaugh’s confirmation, which saw activists confront former Sen. Jeff Flake (R-Ariz.) over his swing vote on the Judiciary Committee, Ocasio-Cortez praised the behavior of the women who stood up to Flake.

Thanks to Alexandria Ocasio-Cortez we now know Ana Maria Archila is an illegal alien. So we now have illegal alien Soros-paid activists influencing the Supreme Court confirmation process.

Ocasio Cortez said that the immigrant, Ana Maria Archila, risked “deportation” in standing up to Flake. However, nothing else has ever been proven about Archila’s immigration status, and she hasn’t been deported since confronting Flake. There’s also no proof she was working on behalf of George Soros.

One of the themes of the breathless reports by the Gateway Pundit is failure to realize when Ocasio-Cortez joking.

When the congresswoman said people who were cool with the GOP tax cut going only to the super-rich shouldn’t be able to wonder “how are we going to pay for Medicare-for-all,” the Gateway Pundit reacted like she was threatening to send people to the gulag.

Ocasio-Cortez showed a studied ignorance of the Constitution, economics and taxation … But in true communist fashion, she believes that the owners of yachts don’t deserve to pay businesses and employees with their money and instead should have their wealth confiscated by the State to fund tried-and-failed socialism.

Her statement was just that the outlet’s opinion about how America couldn’t fund programs to help the poor was being made in bad faith by well-to-do people.

You’d think bad-faith arguments were something the Gateway Pundit would be extremely familiar with at this point, given all its reporting on Ocasio-Cortez. But it appears that’s not the case.