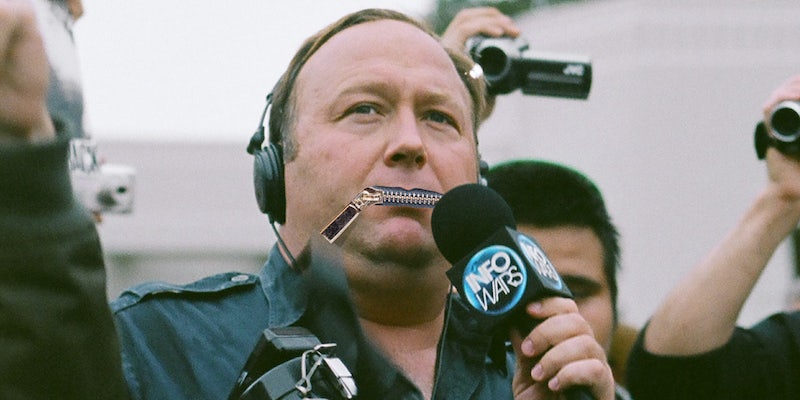 Conservatives can't be censored on the platforms they agreed to join

Over the span of just a few days, conspiracy theorist and provocateur Alex Jones had his videos banned from the two most popular streaming sites in America.

On July 25, YouTube pulled down four videos from Jones’ publishing platform InfoWars and gave him a 90-day ban from livestreaming—the first strike in one of three he’d need to accumulate to have his account permanently deleted.

The next day, it was Facebook’s turn, banning Jones’ personal page for 30 days and pulling down the same four videos that YouTube banned.

Among the banned videos were one showing an adult apparently shoving a child to the ground, another called “’Islam Has Already Conquered Europe” that claims Muslim immigrants to Europe are responsible for “95% of the crime” on the continent, and a third attacking transgender children.

All of these violate both sites’ policies against hate speech and bullying.

Jones’ punishment by the social networks came as Twitter botched the launch of a new algorithm that minimized the exposure of far-right conservative voices on the site.

In all these instances, the first word that came out of everyone’s mouth was “censorship.”

Censorship of conservatives on social media has reached a breaking point. We will not be silenced. My discussion w/ @IngrahamAngle ↓ #StopTheBias pic.twitter.com/3hBTkI9JH0

Jones attempted to get around the bans by livestreaming on YouTube using different accounts. He also tried to gin up outrage among his followers by crying that the two sites were engaged in heavy-handed, fascistic censorship.

Calling his anti-censorship crusade “blowing up the Death Star,” Jones portrayed himself as the victim of a faceless bureaucracy intent on destroying his right to free speech.

“Exposing internet censorship and having a real national debate about it, will bring it down,” Jones thundered on his livestream—in flagrant violation of the ban.

This isn’t a ban. It’s another half-measure by @TeamYouTube to avoid having to ban him permanently which, according to the @YouTube Terms Of Service, he has earned many times over. He’ll be back and the rhetoric will only get worse because he knows he can get away with anything.

As far back as 2010, Jones was complaining that YouTube engaged in a “criminal act” by pulling down his 2009 film “The Obama Deception.”

In 2017, he tweeted that YouTube was censoring his videos supposedly blowing open the “hoax” of the staged Sandy Hook Elementary School shooting by pulling them off the site.

Another InfoWars video from February 2018 declared that “the big computer companies and telecoms” were engaged in “Hitler levels of censorship” against him and other conservatives.

Then in June, Jones’ InfoWars site published a 62-page “emergency report” on how tech giants and the deep state combined to aggressively silence the free speech of conservatives.

In March, Jones claimed his YouTube channel was about to be deleted, and that “all 33 thousand videos [would] be erased.” This didn’t happen, and YouTube claimed it was never going to happen.

But no matter how loudly Jones claims it, the bottom line is that private companies can’t censor speech, only the government can.

Nor is a person having their personal content removed from social media a First Amendment issue.

A number of experts in technology and communications all agreed Jones has no basis for accusing social media companies of censoring him or diminishing his First Amendment rights.

“The First Amendment protects us against overbroad censorship by the government and sets an extremely high bar to government censorship based on the viewpoint or subject matter of someone’s speech,” Emma Llanso of the Center for Democracy & Technology told Daily Dot.

Annemarie Bridy, an affiliate scholar at the Center for Internet and Society at Stanford University echoed that, telling the Daily Dot that “the First Amendment limits only the government’s ability to restrict freedom of speech. It doesn’t limit what corporations that own social media platforms can do.”

Bridy also brings up a second important point: that social media users agree to abide by the terms of service of the site they’re posting on.

The same goes for Twitter’s decision to hide accounts from search that they said exhibited troll-like behavior.

“Social media companies enjoy their own First Amendment interests in setting the rules for what speech they will and won’t host on their platforms,” Llanso told Daily Dot. “They’re also protected by Section 230 from lawsuits brought by users over the content that platforms choose to remove from their services.

Legal scholars tend to agree, with  an editorial in Columbia University’s Science and Technology Law Review saying that “as a private entity, Facebook’s censorship does not readily fit within the confines of traditional First Amendment jurisprudence.”

It’s possible that a First Amendment challenge will reach the Supreme Court, and redefine what and how social media companies pull down from their sites. Courts have already held that users have a right to gather data without being legally punished.

But as of now, nobody has a constitutional right to put up a Facebook video or have a Twitter account, and as long as the platform isn’t violating established civil rights law, they have the right to pull down anything they believe violates their terms of service.

When Facebook’s rules for what content it allows and what it pulls down leaked in 2017, they were criticized for seeming to dance on an invisible line between what was credible and not credible.

It took another year for the company to publicly release its guidelines, where they were again criticized for splitting hairs to an almost absurd level—and for relying on thousands of low-wage freelance “content moderators” to make decisions on what can stay or go.

Indeed, at the same time as the four InfoWars videos were being pulled down, both platforms left up a video where Jones alludes to murdering Special Counsel Robert Mueller. In fact, it was Jones himself who took down the Mueller video.

And employees from both sites have struggled to communicate their policies to news outlets, with Facebook claiming that Jones was “close” to a total ban from the site—but unable to articulate why, or what would trigger it.

Facebook has repeatedly declined to say specifically how many times InfoWars would need to violate its standards to warrant a ban. https://t.co/Rb9VHExU48

The subject has even been grist for the mill for Congressional hearings, where conservative video makers Diamond and Silk complained at length about their “censorship” to a host of Republican senators.

“We can all recognize that the decisions made by massive social media platforms can exert a lot of influence over which speakers—and which ideas—can gain an audience,” Llanso told Daily Dot.

“It’s crucial that social media platforms be transparent about what their policies are and how they enforce them, and to provide users an opportunity to appeal if they think the platform has made a mistake.”

But even if a platform does make a mistake in pulling down content that should have stayed up, it’s not censorship.

Jones is likely to have another example to add to his crusade, as news that Spotify was hosting Infowars podcasts was greeted by calls for a boycott by users.

If that happens, it’s likely that Jones will again cry foul and claim his First Amendment rights have been stomped on.

But Facebook, YouTube, Spotify, or anyone else can pull down whatever it wants, for any legal reason, even if it’s a reason it can’t quite define.