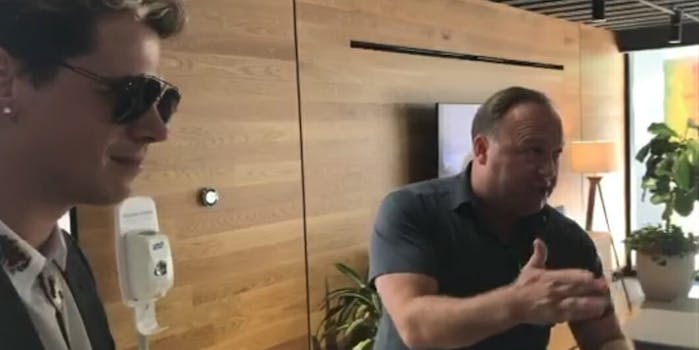 The duo wanted answers about the 'alien spaceship that's landed with AI tech.'

InfoWars host Alex Jones teamed up with far-right provocateur Milo Yiannopoulos to “storm” a Google Fiber store on Monday, and the pair accomplished pretty much nothing.

The whole thing was streamed on Jones’ Periscope, so his followers could watch their visit to the “alien spaceship that’s landed with AI tech” in Austin, Texas.

What this entailed was the internet personalities walking into a Google Fiber office and immediately commenting on photos the company was showing on large screens in the lobby. These photos featured a volcano and cherry blossoms.

Besides questioning an extremely apprehensive employee about things he couldn’t possibly answer, Jones–who smiled with a wide grin the entire time–said he wanted to get a look at the “a little node of the AI tentacle.” (The employee said he didn’t recognize Yiannopoulos.)

They also commented on the belief among far-right internet users that their content is being suppressed by web companies and social media outlets.

At one point in the video, Jones even rubs up against a wall of plants in the Google office while yelling, “Oh, Google, I love you, ahhhh.”

Jones described his decision to visit the store in the video:

“They admit that Google is this big AI system… that watch and listen to you. Our big thing this is we thought little petty humans with our cameras, we would just come into kind of  like a landing zone for the big Google AI bot while it’s planning the nano-tech city ripping energizing cores that I have envisioned.”

Soon enough, police officers walk into the Google office and ask them to leave.

At least for Yiannopoulos, this visit went better than his recent trip to a bar in New York City where he was kicked out after people yelled, “Nazi scum get out.”