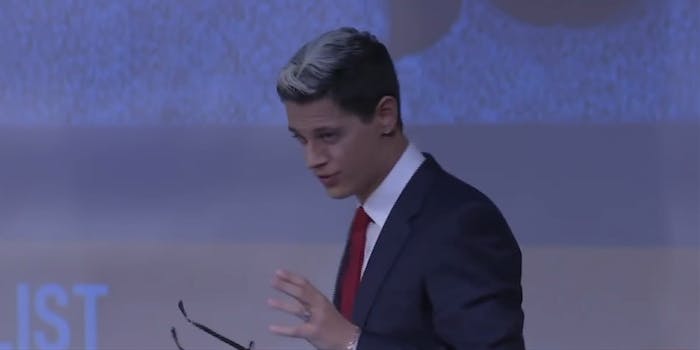 Milo Yiannopoulos was chased out of a bar, and Twitter can’t stop laughing

Patrons shouted 'Nazi scum, get out!'

Disgraced right-wing figurehead Milo Yiannopoulos is once again the laughingstock of the internet, this time for getting kicked out of a bar in New York City.

The former Breitbart editor wrote on Facebook on Sunday that he was “shoved and screamed at” by a “big group” while visiting a Manhattan pub. The group proceeded to yell “Nazis” and “KKK” at him, he said in the post, leading him to eventually leave the bar after the group “blocked me from my table and my bag and yelled at me to leave.”

“It’s now impossible for me to, safely go out for lunch in most major cities in America because I supported Trump at the last election and don’t like feminism,” wrote Yiannopoulos, who has said and done countless racist and misogynistic things throughout his career.

As it turned out, Yiannopoulos just so happened to stumble into the same pub where the New York City Democratic Socialists of America’s Citywide Leadership Committee was meeting, who promptly chanted “Nazi scum get out” at him. A co-chair for the party’s chapter in Upper Manhattan and the Bronx, Annie Shields, later confirmed that the committee “paid for his beers so he could go asap.”

Twitter was quickly smitten with the DSA chapter, praising its leaders for standing their ground and upsetting Yiannopoulos.

Moral of the Story: Don't be a Nazi.

I want to buy a beer for every single person who shunned Milo out of this bar. https://t.co/8HucIGIns5

But it’s particularly troubling that Yiannopoulos used his Black husband as a shield to defend himself, saying in his post that he didn’t “know how I’d explain to my Black husband that I got hurt for being a ‘white supremacist.'”

White supremacy is about a lot more than whether one is willing to date Black men, and Yiannopoulos is notorious for fostering the American white nationalist movement through xenophobic and anti-Black rhetoric. Using his Black partner to defend himself as a “gotcha” response is racist in its own right.

I don't think milo's husband will have nearly as much difficulty processing this information as milo surmises pic.twitter.com/JoOM4npw4H

a little curious about the extent of the sitcom plot antics Yiannopoulos and his retinue use to keep His Black Husband, Who Is Black from figuring out what Milo’s day job is

lol now I see why he hired ghost writers.

Also, how was his first concern that he'd have to explain to his black husband that he got hurt for being a white supremacist? lol

Yiannopoulos, who is banned from Twitter, is already back on the internet, though. This time promoting an article on Facebook by fellow far-right writer Ian Miles Cheong, who once feared anti-fascist activists would take a Twitter joke seriously and behead white people.