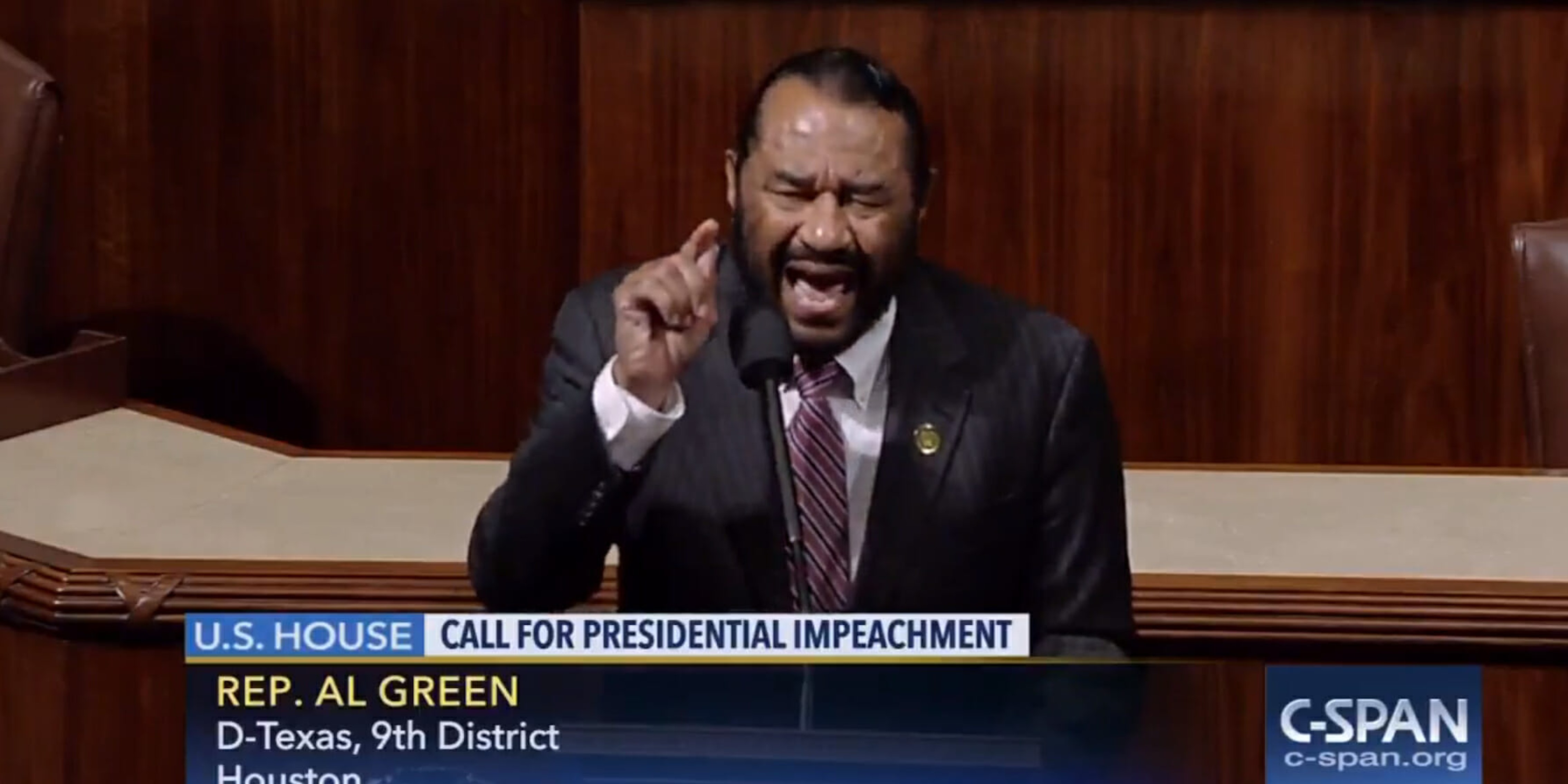 "No one is above the law," the Texas congressman said during his passionate remarks.

Rep. Al Green (D-Tx.) called for the impeachment of President Donald Trump on the House floor early Wednesday morning, accusing him of obstruction of justice.

“There is a belief in this country that no one is above the law, and that includes the president of the United States of America,” he said. “This offense has occurred before our very eyes … we are talking about a president who fired the FBI director who was investigating the president for his connections to Russian involvement in the president’s election.”

Green tweeted about his plan before speaking on the House floor.

Today on the floor of the Congress of the United States of America, I will call for the Impeachment of the President between 9am & 10am CST.

In his remarks, Green went through the timeline of events that began when Trump made the surprise move to fire former FBI Director James Comey, then subsequently tweeted a warning to Comey about having “tapes” of their conversation.

“Mr. Speaker, we cannot allow this to go unchecked,” Green said. “The president is not above the law.”

Green called on the American people to “speak out” about impeaching Trump, believing that if the calls grew louder, it would move the House of Representatives to act. The Texas representative also mentioned a petition website, ImpeachDonaldTrumpNow.org, urging people to sign it. As of Wednesday morning, 995,421 people have signed the petition.

“Each member of Congress has to make his or her own decision,” he said. “This is where I stand, I will not be moved. The president must be impeached.”

On MSNBC following his speech on the House floor, Green said Trump “has committed obstruction of justice,” and cited the firing of Comey as his reason for calling for the president’s impeachment.

On Tuesday night, the New York Times reported that Comey kept memos of his meetings with Trump that contained a recount of a conversation where the president asked Comey to end the investigation into his former National Security Adviser Michael Flynn.

Green isn’t the only member of the House who seems to believe impeachment could be in the cards with the latest news.

The Hill spoke with Rep. Justin Amash (R-Mich.) on Wednesday. The congressman said the New York Times report that Trump asked Comey to halt the investigation would be grounds for impeachment. “But everyone gets a fair trial in this country,” he added.

Rep. Carlos Curbelo (R-Fla.) joined Amash in edging toward impeachment, telling the Independent Journal Review that the Times report, if accurate, would be “deeply, deeply troubling and disconcerting, and it would open a new chapter of scandal” for the Trump administration. Asked whether it would be grounds for impeachment, Curbelo said, “It depends on the facts. If there was any obstruction of justice, that would obviously rise to that level.”

Watch all of Green’s remarks about impeaching Trump here:

CLIP: @RepAlGreen: "I rise today…to call for the impeachment of the President of the United States of America for obstruction of justice." pic.twitter.com/k3OMGcZbEF

Update 11am CT, May 17: Added comments from Rep. Curbelo.