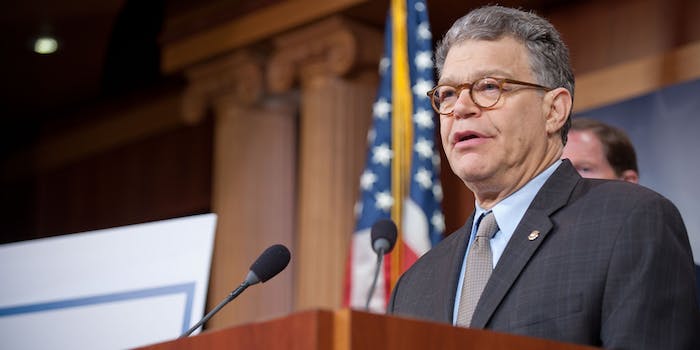 Uber CEO Travis Kalanick has some explaining to do.

The Uber scandal has hitched a ride all the way to Capitol Hill.

In a letter sent to Uber CEO Travis Kalanick on Wednesday, Sen. Al Franken (D-Minn.) questions the ride-sharing company over reports of a “troubling disregard for customers’ privacy, including the need to protect their sensitive geolocation data.”

Franken’s concerns over Uber’s privacy practices stem from a BuzzFeed report, published Monday, which revealed that Uber Senior Vice President of Business Emil Michael suggested at a recent dinner in Manhattan that the company spend “a million dollars” to dredge up personal details on journalists who are critical of the company.

Michael’s vindictive plan reportedly stems from articles by PandoDaily editor Sarah Lacy, who recently accused Uber of “sexism and misogyny,” and for having an “asshole culture,” for reportedly partnering with an escort service in France.

BuzzFeed further reported that Uber employees have access to a tool called “God View,” which reportedly allows many corporate Uber employees to track the locations of Uber drivers and customers who request a car. The general manager of Uber NYC, Josh Mohrer, used “God View” to track BuzzFeed journalist Johana Bhuiyan as she headed to Uber’s offices in Queens, N.Y., earlier this month.

In a blog post published on Tuesday, Uber spokeswoman Nairi Hourdajian asserted that “Uber has a strict policy prohibiting all employees at every level from accessing a rider or driver’s data,” and laid out a number of specific instances in which “God View” might be used for legitimate purposes.

“Access to and use of data is permitted only for legitimate business purposes,” Uber said in a statement. “Data security specialists monitor and audit that access on an ongoing basis. Violations of this policy do result in disciplinary action, including the possibility of termination and legal action.”

Michael has since issued a halfhearted apology, while high-profile Uber investors have largely condemned the SVP’s comments. And the company is investigating Mohrer for his tracking of Bhuiyan.

For Franken, who chairs the Judiciary subcommittee on Privacy, Technology, and the Law, the issue is far from resolved. In a series of 10 blunt questions, the Minnesota senator demands direct answers on the company’s response to Michael’s questions, its use of “God View,” the nature of the data Uber collects on its customers, its policy on sharing user data with third parties, and its policy of perpetually storing customer data, including geolocation data, even after a user has deleted her account.

Uber’s Kalanick has until Dec. 15 to respond to Franken’s questions.