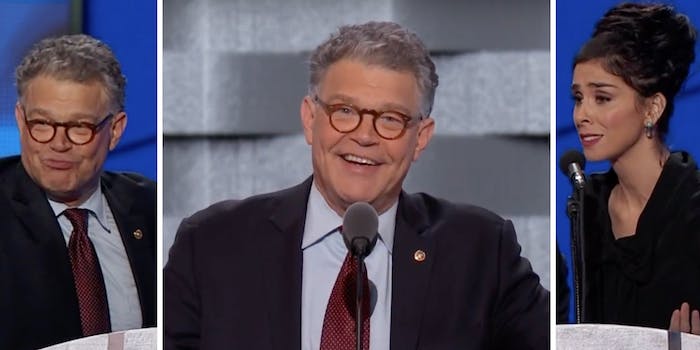 It turns out Al Franken is still funny.

A decade after the comedian became the Democratic senator from Minnesota, Franken took the stage at the party’s convention in Philadelphia and performed what can be only be described as a slamming stand-up comedy set poking fun at Republican nominee Donald Trump.

The first night of the Democratic National Convention was an up-and-down affair, as traces of discord struck both the arena and the streets outside.

But it’s hard to be too angry when a master comedian is telling us it’s time to leave our four-year-old children at home to operate the microwave on their own.

This was the most intentionally funny moment of the 2016 campaign so far.

The next comedian of the night arrived about 10 minutes later, when Sarah Silverman took the stage alongside Franken. She had few jokes land compared to Franken—but it’s what she said when the DNC’s producers asked the pair to “stretch” their time on stage that made things interesting.

“To the ‘Bernie or Bust people,’” Silverman said in reference to supporters of Hillary Clinton‘s popular challenger, Sen. Bernie Sanders (I-Vt.), who refuse to support the former secretary of state, “you’re being ridiculous.”

.@SarahKSilverman: “To the #BernieOrBust people, you’re being ridiculous.” #DemConvention #DemsInPhillyhttps://t.co/ZUERJaQGjq

As uncomfortable as Franken looked—the entire convention so far has been about party unity between Clinton and Sanders supporters—giving the risqué Silverman a chance to ad lib during a live televised event is anything if not risky.