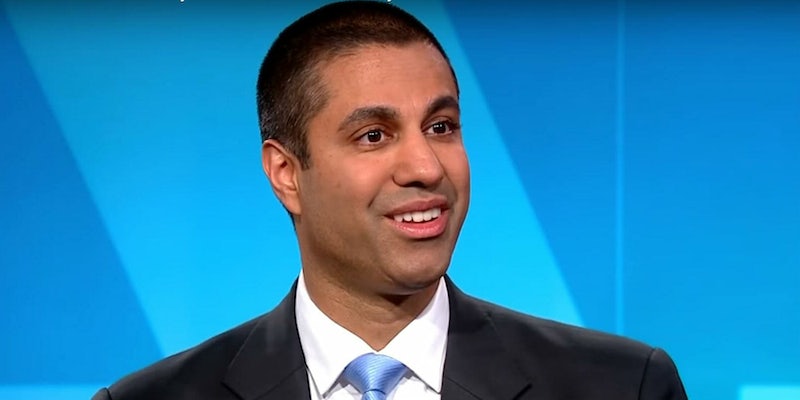 He says federal efforts to build the next-gen network would be "counterproductive."

Fresh off repealing net neutrality, Ajit Pai has, once again, sided with corporations over government regulation.

We learned this weekend that officials in Trump’s National Security Council are considering a government-run 5G network to prevent Chinese companies from dominating wireless infrastructure, according to a document obtained by Axios.

Its author argues the U.S. government needs to build and operate a centralized wireless network to stop Chinese giants ZTE and Huawei from owning the 5G market share. The report likens such a network to the Interstate Highway System, a project commissioned in 1956 as a way to improve infrastructure and accelerate the U.S. economy. White House officials told Recode on Sunday that the document is dated and its plans may never come to fruition. However, its existence prompted a response from FCC chairman Ajit Pai.

Pai released a statement on Monday opposing the plan for a government-operated 5G wireless network.

“I oppose any proposal for the federal government to build and operate a nationwide 5G network. The main lesson to draw from the wireless sector’s development over the past three decades — including American leadership in 4G — is that the market, not government, is best positioned to drive innovation and investment.

What government can and should do is to push spectrum into the commercial marketplace and set rules that encourage the private sector to develop and deploy next-generation infrastructure. Any federal effort to construct a nationalized 5G network would be a costly and counterproductive distraction from the policies we need to help the United States win the 5G future.”

His position on the issue comes as no surprise. Pai has shown that he cares about little else than to give power to large corporations. He proved as much when he ignored the pleas of millions of Americans and dismantled net neutrality laws, which were put in place to ensure that all internet traffic is treated equally.

Pai recommends that the government continue to open up spectrum for the big four mobile carriers: T-Mobile, Verizon, AT&T, and Sprint.

For those who aren’t familiar, 5G is the next-generation mobile network set to succeed 4G LTE. Its super-fast speeds, low latency, and strong security are designed to enable a number of emerging technologies, including high-resolution video streaming, internet of things (IoT) systems, driverless cars, machine learning, and artificial intelligence (AI). Experts predict the network will find its footing by 2020.

The unnamed author of the plan to create a government-run 5G network argues that if U.S. mobile carriers use third-party infrastructure, Chinese telecom giants will have their way, helping the country “win politically, economically, and militarily.” That belief is founded on accusations that Huawei and ZTE, China’s big telecom giants, have distorted pricing and used preferential financing to dominate the telecom infrastructure market. The document notes how Huawei has increased its market share in radio infrastructure from 11 percent in 2011 to equal that of former market leaders Ericsson and Nokia.

Huawei became the largest vendor of telecom network infrastructure in 2016, despite being locked out of the U.S. market for security concerns. Congress has asked U.S. carriers to not install Huawei equipment, though AT&T partnered with the company to install its network in Mexico. However, AT&T recently blocked the sale of Huawei phones amid security concerns.

“China has achieved a dominant position in the manufacture and operation of network infrastructure. China is the dominant malicious actor in the information domain,” the document states.

To prevent China from owning the market, the author suggests two types of networks: single-block networks and multi-block networks. Single-block networks are the more radical option. In this setup, the U.S. government would build and operate one single mid-band network and parse it out to major mobile carriers. According to the document, the benefits of this option include faster speeds and improved security. The only con is what the author calls a “new paradigm,” otherwise known as killing competition. In the multi-block model, carriers build and own their own networks “based on 100MHz spectrum blocks.”

The United States Telecom Association hit out at any plans to create a high-speed mobile network operated by the government.

“There is nothing that would slam the breaks more quickly on our hard-won momentum to be the leader in the global race for 5G network deployment more quickly than the federal government stepping in to build those networks,” USTelecom President and CEO Jonathan Spalter wrote in a statement. “The best way to future-proof the nation’s communications networks is to continue to encourage and incentivize America’s broadband companies—working hand-in-glove with the rest of the internet ecosystem, and in partnership with government, to continue to do what we do best: invest, innovate, and lead.”

AT&T, T-Mobile, and Verizon are all building out their own 5G networks. AT&T claims a full-blown 5G network could be ready by 2018.

The entire report, which is filled with fascinating tidbits about Chinese telecom companies and how the government is the answer to 5G, was uploaded on Axios.