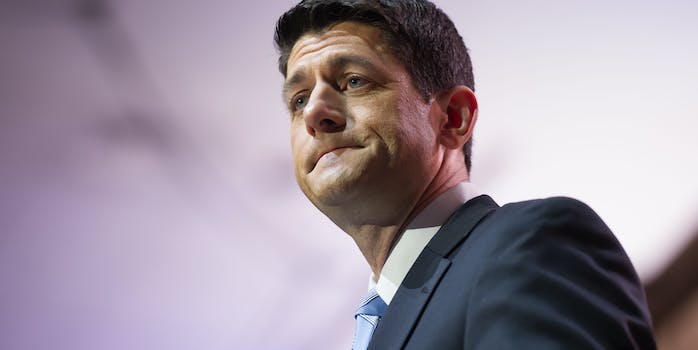 Despite the House's passage of a new healthcare bill, the Senate is going to have a hell of a time getting this thing anywhere.

The House of Representatives on Thursday passed a bill fundamentally altering former President Barack Obama’s Affordable Care Act. Although it is a major victory for President Donald Trump, the bill is far from becoming law.

The American Healthcare Act (AHCA) is out of the House with 217 GOP lawmakers supporting the new healthcare legislation. Every Democrat in the House opposed it, as did 20 Republicans. But, again, don’t worry about it making drastic changes to the nation’s healthcare system just yet.

There are a number of major hurdles the AHCA needs to clear before it imposes sweeping changes to the healthcare system for tens of millions of Americans. Here’s what you need to know.

It’s a distinct pivot from Trump’s pledge to eliminate Obamacare and overhaul healthcare. But the Republicans did write three major changes for Obamacare with Thursday’s bill. It a) reduces the “individual mandate” that taxes Americans who do not maintain their own health coverage, thereby cutting $883 billion in taxes while slashing federal funds for Medicaid; it b) weakens the language that forces insurers to cover Americans with pre-existing conditions; and it c) gives states the freedom to waive coverage of 10 “essential benefits,” which could allow private companies to drop those benefits, too.

In short, the AHCA allows states to fully repeal Obamacare one by one, but it does not repeal it at the federal level.

2) The Senate must now vote on AHCA—if they vote on it at all.

The Senate will not be voting on the proposed healthcare act as is. In fact, they may not vote on the AHCA at all, with Senate Republicans already working to craft their own piece of legislation that is expected to be drastically different than the AHCA. If the Senate can pass that bill—they would need it to be budget neutral to do so because that’s the only way to pass it with just 51 votes—it would then head back to the House, where it will likely face resistance from the conservative House Freedom Caucus, which already blocked the bill once for not being conservative enough.

This back and forth process can significantly delay passage of the bill—if a consensus in the Senate is even reached.

3) The AHCA is largely a political maneuver.

Thursday’s headlines could have been nothing but an effective way to anger your liberal friends on Facebook. Members of Congress needed to show their respective constituents that they’re moving forward with their campaign promises to ditch Obamacare. There are several Republican senators who are not on board. Hell, even Republican leaders have suggested scrapping AHCA altogether.

4) Republicans can force this thing through.

Republicans can pass this bill through what is called budget reconciliation. This process would only require 51 votes. But this can only happen if House Republicans eliminate a specific change that was recently made to AHCA. (Congress was exempt from the law, and the amendment changed that.)

However, if that amendment stays as written, it has to be passed the old-fashioned way, which means Democrats could filibuster it and block a vote by forcing 60 votes to pass.

Even still, Republicans could eliminate the legislative filibuster (filibusters used on regular bills like the AHCA, which are not enshrined in the Constitution), but that would be a high-risk gamble that could come back to bite them.

Repealing Obamacare was a central issue to Trump’s campaign and Republicans remain pressured to successfully pass their own version of healthcare law. Trump and his administration failed in their first attempt in March, but despite its unpopularity with the American people, are right back at it.

Trump praised Thursday’s AHCA bill as “incredibly well crafted,” poised to end the “suffering” of Obamacare. It’s a difficult fight, but it’s one the president is committed to seeing through.