“Adele has not given permission for her music to be used for any political campaigning,” a spokesperson representing Adele told the Independent, noting that all the singer asks is that candidates stop using her songs for political purposes.

Trump’s use of Adele’s music drew international attention when when her 2011 smash “Rolling In The Deep” was played onstage after former Alaska Governor Sarah Palin endorsed Trump at a rally in Oklahoma in January.

Trump isn’t the one and only GOP presidential hopeful who has been rebuked for appropriating Adele’s music in recent days. Late last month, former Arkansas Governor Mike Huckabee produced a music video parody of Adele’s global hit “Hello” about his experiences campaigning ahead of the Iowa caucuses. The video was only posted to YouTube for few days before it was taken down due to a copyright claim from Adele’s record label, EMI.

All that remains of Huckabee’s video is this screenshot, which should give you an idea of how weird it was. 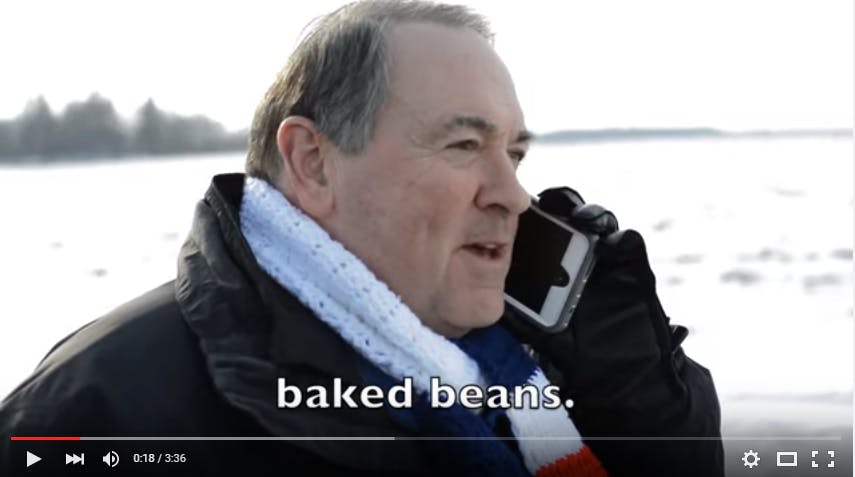 The both actions came within on a few days of each other, so it’s likely Adele’s management team views these uncleared uses of her songs as something more than just water under the bridge.

While Adele hasn’t been particularly outspoken with its comes to her political beliefs, rumor has it that she considers herself “a Labour girl,” though it’s hard to translate that to U.S. presidential politics.

These incidents aren’t the first times either Trump or Huckabee have been criticized by musicians for using songs without permission.

In November, Huckabee played Survivor’s iconic anthem “Eye Of The Tiger” as he escorted Kim Davis, the Kentucky county clerk who went to jail rather than certify same-sex marriages, onstage at an event shortly after Davis’s release. The band’s surviving members were not pleased, and sought remedy through a lawsuit filed suit against the politician.

Early in his presidential campaign, which now feels like a million years ago, Trump regularly played Aerosmith’s “Dream On” at rallies; however, the classic rockers sent Trump a cease-and-desist letter regarding the practice. The candidate agreed, but in true Trump fashion of turning tables for his own benefit, he acquiesced to frontman Steven Tyler’s request with an opportunity for self-aggrandizement followed by a personal insult.

Even though I have the legal right to use Steven Tyler’s song, he asked me not to. Have better one to take its place!

Steven Tyler got more publicity on his song request than he’s gotten in ten years. Good for him!

H/T The Independent | Photo by Christopher Macsurak/Wikimedia Commons (CC BY 2.0)