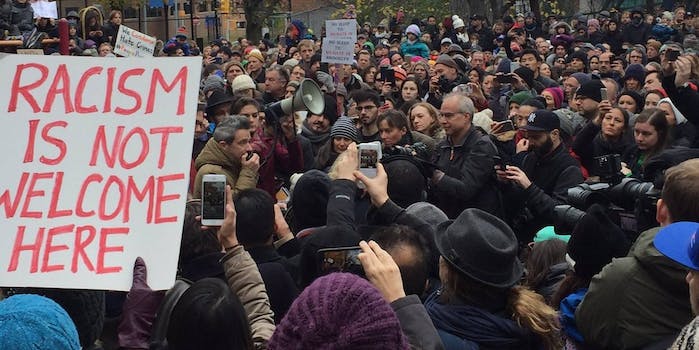 'No sleep 'til no hate in Brooklyn.'

Two days after a Brooklyn park named for late Beastie Boys co-founder Adam Yauch was found defaced with swastikas and a pro-Donald Trump message, nearby residents took back the park with love.

On Sunday, a horde of people, including Beastie Boys co-founders Adam Horovitz and Michael Diamond along with Ben Stiller, converged on Adam Yauch Park to show their support and to denounce the racist messages. The National Anthem was sung, and a variety of speakers—including New York State Senator Daniel Squadron, a rabbi, and an imam—addressed the crowd that reportedly numbered in the hundreds.

Here was the scene.

Adam Horovitz, aka Ad Rock of the @beastieboys, denounces painting of a swastika in a kids' park named for peace loving Adam Yauch, aka MCA pic.twitter.com/N6rXH6daq2

Adam Yauch Park is so full of people here to denounce hate that some are climbing the playground equipment to get a view #BeastieBoys pic.twitter.com/jAu3BksViM

Standing with people of Brooklyn, my daughter, @adrock, @DanielSquadron, and many more in Adam Yauch Park. #MCA #NYC #StandUpAgainstHate pic.twitter.com/C4pg6YFoJR

Huge crowd in #adamyauchpark Brooklyn to stand against hate in wake of hateful messages posted on playground equipment pic.twitter.com/JcDBCFPoAF

According to in-person accounts, the rally was peaceful and filled with love, and the program ended with Squadron, the politician who helped organize the last-minute rally, leading the crowd in a rendition of “This Land Is Your Land.”