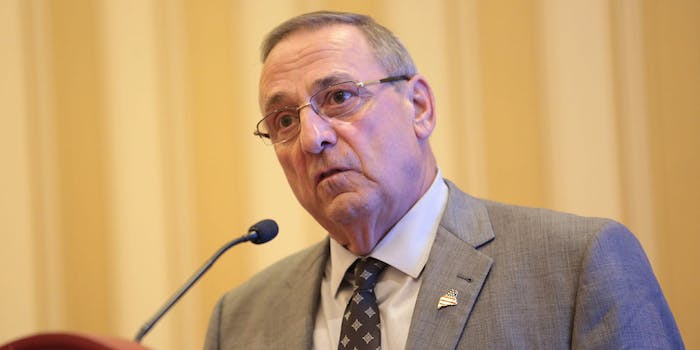 Maine’s chapter of the American Civil Liberties Union (ACLU) has sued the state’s governor, arguing that he discriminates against citizens by blocking them on his official Facebook page.

The suit follows several social media-centric legal battles that courts have decided in recent weeks, at least one of which found a government official violating a constituent’s constitutional rights by blocking them from a Facebook page. A similar lawsuit, filed against President Donald Trump, also argues that blocking people on Twitter is a constitutional violation.

The ACLU argues that Gov. Paul LePage censored people on his “Paul LePage, Maine’s Governor” Facebook page where he conducts “government business.” The ACLU is acting on behalf of two Maine women whose comments were deleted from the page and subsequently blocked from commenting further.

“Social media has quickly become a crucial tool for constituents to express their opinions to public officials,” Meagan Sway, an attorney with the ACLU of Maine, said in a statement. “Free speech must be protected from government censorship on Facebook just as is it in any other public forum.”

The suit argues that LePage uses the Facebook page to share official announcements and press releases and was even linked to on the official Maine.gov website in July. The governor’s office did not respond to a letter sent by the ACLU asking them to respond within two weeks.

In a post on the Facebook page in question, LePage seemed confident he was not breaking any laws.

“Under the about section of this Facebook page it states that is Paul LePage’s official politician page—not a government page,” the post reads, in part. “The about section of the page also directs people who wish to contact the Governor directly about a personal issue to his official contact form so their problems and concerns can be dealt with securely by official State staff.”

Last month, a Virginia federal court ruled that a politician violated the free speech rights of one of the residents who lived in her area by blocking him from her Facebook page. The Supreme Court also ruled earlier this year that using social media was a constitutional right.