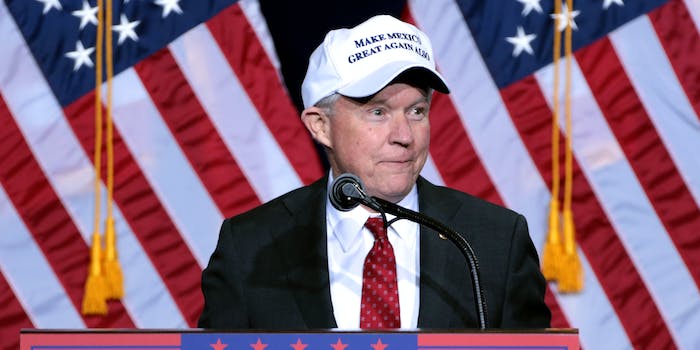 Jeff Sessions came under fire Thursday for claiming no contact with Russia during sworn testimony.

Democratic members of the House Judiciary Committee on Thursday called for a criminal investigation into Attorney General Jeff Sessions, who during a Senate confirmation hearing in January claimed he had no contact with Russian officials.

Sessions’ response to a question about Russia came under intense scrutiny Wednesday evening as news broke that he had twice met with Russian Ambassador Sergey Kislyak, one of the federation’s most distinguished envoys, whose career in foreign affairs extends back to the height of the Cold War.

“First, we would ask the FBI and the United States Attorney’s Office for Washington, D.C., to take up immediate criminal investigation into these statements, which could potentially implicate a number of criminal laws, including Lying to Congress and Perjury,” the lawmakers wrote in a letter to U.S. Attorney Channing D. Phillips.  “…We would also ask that the investigation consider any involvement or knowledge the Trump Administration and Trump Campaign may have regarding these matters.”

The lawmakers also called for the FBI to deliver a full briefing on its probe into Russia’s involvement in the 2016 presidential election.

“Jeff Sessions took an oath before the Senate Judiciary Committee to tell the truth, the whole truth, and nothing but the truth, and it is now clear that he broke that oath in his confirmation hearing,” ACLU Executive Director Anthony D. Romero said in a statement.

“If senators of both parties allow an attorney general nominee to plainly lie under oath with no repercussions, they will render our government’s cabinet confirmation process no more than kabuki theater.”

Romero added that a full investigation was necessary to determine whether or not Sessions had perjured himself. “No one is above the law,” he said, “certainly not those sworn to uphold it.”

During a confirmation hearing on Jan. 10, Sen. Al Franken (D-Minn.) questioned Sessions over developing reports that described—as Franken put it—a “continuing exchange of information during the campaign between Trump surrogates and intermediaries for the Russian government.”

“If there is any evidence that anyone affiliated with the Trump campaign communicated with the Russian government in the course of this campaign, what will you do?” Franken asked.

“Sen. Franken, I am not aware of any of those activities,” he said. “I have been called a surrogate at a time or two in that campaign and I did not have communications with the Russians, and I’m unable to comment on it.”

In a startling report on Wednesday night, the Washington Post revealed that Sessions, at the time a senior member of the Armed Services Committee, had indeed communicated with the Russian ambassador to the U.S. twice last year, including once in the senator’s office in September while also serving as one of then-candidate Donald Trump’s top foreign policy advisors.

Sessions had formally endorsed Trump’s candidacy seven months prior, though he had appeared at a Trump campaign rally before that, in August 2015, wearing one of Trump’s trademark “Make America Great Again” hats.

On Thursday morning, key Republicans lawmakers began calling for Sessions to recuse himself from the ongoing investigation into contacts between the Trump campaign and Russia, which led an aggressive campaign to disrupt the 2016 presidential election—and, according to U.S. intelligence officials, may have worked to help elect President Trump.

Rep. Kevin McCarthy (R-Calif.), the House majority leader, and Rep. Jason Chaffetz (R-Utah), who heads the House Oversight Committee, both called on Sessions to recuse himself. “I think—the trust of the American people—you recuse yourself from these situations,” McCarthy said on MSNBC’s Morning Joe.

House Minority Leader Nancy Pelosi (D-Calif.), who was joined by other Democrats, took it one step further. “After lying under oath to Congress about his own communications with the Russians, the Attorney General must resign,” she said, adding: “Sessions is not fit to serve as the top law enforcement officer of our country.”

The White House is vehemently defending Sessions. Speaking with Fox News, White House Press Secretary Sean Spicer said there was no reason for Sessions to recuse himself. “He was 100 percent straight with the committee and I think that people [who] are choosing to play partisan politics with this should be ashamed of themselves.”