The AARP has developed a tablet for baby boomers

Is the RealPad better than the iPad for senior citizens?

Although surrounded by technology choices, research underscores the fact that a large number of seniors in the U.S. live on the deficit side of the digital divide.

AARP, which boasts more than 35 million members, hopes to reach that large, unserved portion of consumers (who either are not connected via any device or own an ereader, tablet, or laptop). The RealPad, a tablet with a 7.8-inch HD screen, is the organization’s remedy to conquering seniors’ fear of new technology.

“We know there is a divide,” AARP CIO Terry Bradwell told the Daily Dot. “The older you get the bigger that divide.”

Data from Pew Internet Life shows that there cannot be a one-size-fits-all solution to breaking down these technology barriers. According to the research center, the senior population divides into two segments—a younger group within that population that is highly educated, affluent, and embraces technology, and one that is older, not as affluent, with less education who are likely facing health issues. This latter group has the greater fear of new technology.

The goal of AARP’s device, priced at $189 and available online as well as at Walmart, is to reach those who are digitally apprehensive and to allow them to connect with family and friends. Blackwell said his organization is trying to bridge the market gap for those who might find an iPad, Kindle Fire, or other popular tablet overly complicated.

To assist those who might run into issues with anything from finding the local wireless connection to setting up email, Blackwell said AARP provides “a halo of support.” So how helpful is it?

After a week of using the RealPad, I found that the tablet falls into the mid-tier tablet category of a mid-tier. It unfortunately lacks any sort of distinction that would make it appealing to seniors who are technologically challenged. At a retail price of $189, there are many better options for consumers who need a helping hand in setting up and using their devices. 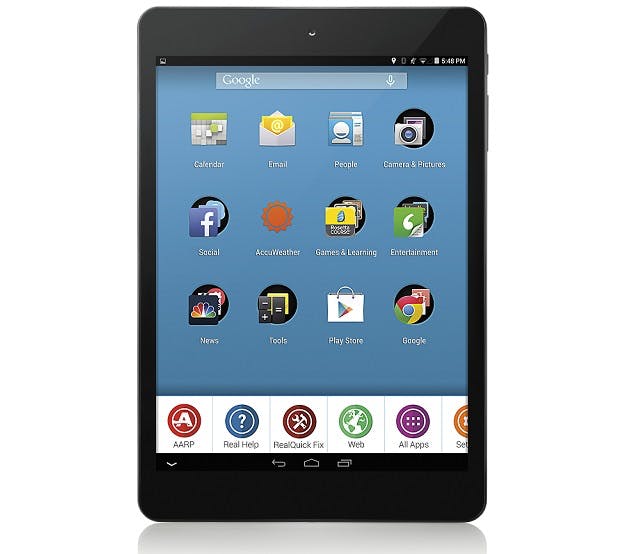 But the RealPad isn’t without its benefits. It includes a very helpful manual that walks a user through turning the device on, finding the Wi-Fi connection, setting up a new account, and even redeeming the free one-year membership offer from AARP. Sure, these sounds like tedious instructions, but they’re time-consuming, often confusing steps that stand between seniors and new technology. Eliminating might be simple, but it’s important.

The 7.8-inch screen is reasonably sharp and with 16GB of memory, operates quickly with little lag time in loading. The battery life is strong; left on overnight, it remained more than half full of power. There is a row of help buttons across the bottom of the screen that provides quick answers to common issues for easy troubleshooting. The RealPad also comes with free, 24/7 live help via a toll-free number.

Despite these conveniences, there are drawbacks. The setup is easy if you have a Google account, but using another email address requires extra steps (some older consumers who are still using Hotmail; Aol even). A Google account also is necessary to use the Google Play Store and Hangouts, which is the only video chat app preloaded. The more popular Skype is available via the Google Play Store… which, as previously stated, requires a Google Play account.

Missing from the “All Apps” screens were Hulu Plus, Pandora, and other popular basic online radio services, such as iHeartRadio.

The help and support can also be somewhat confusing. For example, when I moved locations and wanted to change my Wi-Fi setting, the instructions were not helpful. Carrying the manual around may be useful for the first few weeks (or longer).

I found the additional apps that appear on subsequent screens crowded and confusing, lacking basic information that would guide those new to the Web.

And the sound from the device’s speakers is poor, so using a headset is a must for anyone watching a movie or TV show. The RealPad also lacks any USB slots, though it does have a slot for a SD card.

The Bottom Line: There’s nothing really wrong with the RealPad other than the price. It uses the latest flavor of Android and includes all the basics. The online and offline help is decent, but would not be of value to older users who don’t have command of basic tech skills. And that command of basic skills is what the RealPad is supposed to be enabling, not relying on.

Really, RealPad’s competition comes from the “starter” tablet market. With Black Friday sales coming, there are a number of tablet options that cater to older users who may not be Internet savvy. At the top of the list is the Amazon Kindle Fire HD 7-inch 16GB Tablet, which will sell for $99 at Best Buy for early shoppers. The Kindle Fire has a great screen and comes with a free year of Amazon Prime. Leaning more toward Apple, Target is offering a 16GB non-Retina iPad Mini for $249 with an $80 gift card that can only be used in the store.

There are scores of other tablets too, some as low as $49, which are close in comparison to the RealPad. Sure, they don’t come with a free year of AARP membership, but that is only a $16 annual fee for anyone over 50.

Of course there is a device-free way for seniors to get digitally connected. Head to Seniornet and find a local computer class, or check out what Meetup has to offer. Then, when you do choose a tablet, whatever it is, you’ll be ready to use it.