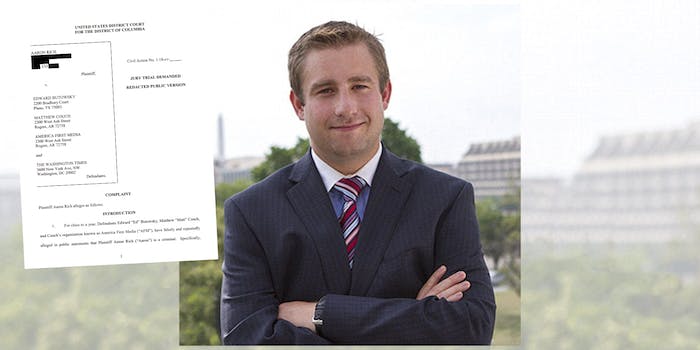 Couch has responded on Periscope.

The brother of Seth Rich, the former Democratic National Committee (DNC) staffer whose unsolved murder has become a breeding ground for right-wing conspiracy theories, has sued several media organizations and individuals for “falsely and repeatedly” spreading slanderous statements about him.

Seth Rich, 27, was murdered in July 2016 and his case remains unsolved. The nature of his death has created several conspiracy theories, including that he was targeted by Democrats for leaking DNC emails to WikiLeaks. Authorities say that Rich was killed in a robbery gone wrong.

Aaron Rich’s lawsuit is separate from one filed by the Rich family against Fox News following a story it retracted implying that Seth Rich leaked documents to WikiLeaks.

Rich’s brother alleges in the lawsuit that the defendants claimed to have “proof” that he worked with his brother to “steal data from the Democratic National Committee,” “provided that stolen data to… WikiLeaks,” and “engaged in deceit and obstruction of justice to cover his tracks after Seth was murdered.”

“There is no proof that Aaron engaged in any of the alleged conduct—nor could there be, because none of it happened,” the lawsuit reads. “But Defendants are not interested in the truth. Instead, Defendants are motivated by personal notoriety, financial gain, and naked partisan aims—namely, a desire to discredit allegations that the Trump Campaign colluded with the Russian Government in the 2016 hack of the DNC and the subsequent dissemination of DNC documents on WikiLeaks.”

Michael Gottlieb, Aaron Rich’s attorney, told CNN that Butowsky, Couch, The Washington Times, and American First Media “have spent the past year creating and disseminating a made-up conspiracy theory that Aaron Rich was the technological know-how behind, and financial beneficiary of, Seth’s operation.”

The lawsuit includes several examples of tweets where Couch spoke about Aaron Rich including one where he said “teams” were “digging into the brother of Seth Rich,” and a comment on Periscope where Butowsky said “Aaron Rich needs to come out and admit money is in his account.”

Another tweet from Couch in September 2017 highlighted in the lawsuit reads: “Seth Rich and Aaron Rich did the leak together, they were working together. When is Aaron Rich going to come clean for his brother?”

On Tuesday, Couch went on Periscope to discuss the lawsuit.

“I’m not going to say a whole lot… but, the interesting thing is, does anyone else find it funny that CNN and the Hill and all of these people have an article already pre-written and out before I even know that I’ve been sued? Does anyone else find that highly skeptical?” Couch said. “Please retweet this… I’m being sued for investigating the truth. So if I’m being sued and risking my life, I hope everyone can at least retweet this damn thing and share it. It’s getting pretty serious.”

Couch also said he was considering “counter sue” for “distress” and “for obstructing a murder investigation.”

You can view the lawsuit here.