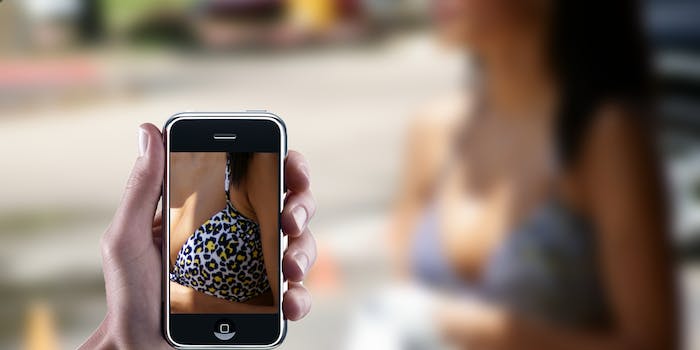 This ‘3D nude scanner app’ is a prank, but it’s still too hot for TV

Remember those X-ray spex ads from comic books? This is the 21st-century version.

Remember when you were a kid and you saw all those comic book ads for X-Ray specs promising they would let you see under a woman’s clothes? They’re back in a 21st century form.

Nude Scanner 3D (link NSFW) is a new British app “for all the young guys and girls who dream about seeing their choice person in some real inner wears.” It’s a prank, apparently, set to go live in the Android store on April Fools’ Day.

An advertisement for the app was pulled after it was shown on the long-running primetime soap Hollyoaks.

The BBC reports that the ad for the app depicted a phone “scanning” a woman’s body and pulling up images of her nude, with her breasts and genitals blurred out. A voiceover for the ad then said the app was a way to “prank your friends,” by making them think you can see what they look like without any clothes on.

A clearance agency approved the ad in advance before it ran during the British TV show. Nonetheless, 26 viewers called in to complain, griping that the ad was sexist and potentially could have been viewed by children. A few even expressed concern that the ad could cause “antisocial” behavior, which sounds a little bit like something a parent from a 1950s teen motorcycle movie would say, but still.

Nude Scanner 3D developer Jesta Digital GmBH initially fought the complaints, arguing that Hollyoaks is not targeted at children (parental watchdog group Common Sense Media says it’s only appropriate for viewers over 15), and the blurred images in the ad were no more explicit than the images of women in bikinis shown on TV on a daily basis. Eventually, however, the ad was yanked from the airwaves.

On one hand, it’s always annoying when parents clutch their pearls and moralize about how all the naked ladies prancing around on the airwaves are corrupting the nation’s youth. On the other hand, Hollyoaks, even if it’s a “prank” app, why run an ad for something as sexist and dumb as a “nude scanner” in the first place?