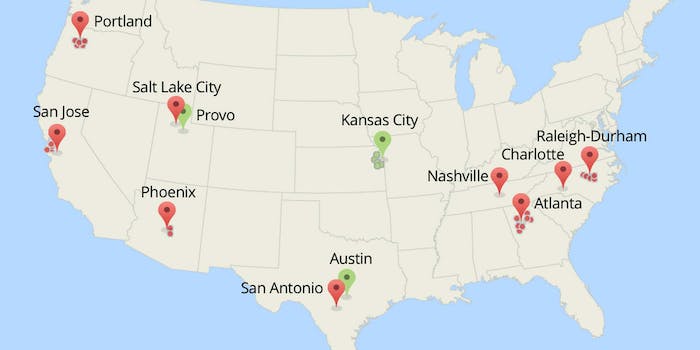 Do you live in one of these 34 cities? Then you might be getting Google Fiber

Good news for people who hate slow Internet: Google Fiber is in talks to expand to 34 new cities in nine major metropolitan areas. This is a joyous day for anyone who has nearly hurled their Macbook across the room when Netflix wouldn’t load. Google’s Internet service promises speeds 100 times faster than standard broadband, with a rate of one gigabyte a second for uploads and downloads.

Right now, Google is still building the infrastructure in Kansas City, Kan., which will be the first city to get the service, although setup is underway in Austin, Texas as well. Google Fiber is still a year away from home installations in Kansas City and probably longer in Austin, but Google is clearly eager to start setting up in more new markets. Google bought an existing fiber-optics network in Provo, Utah and is converting it to deliver Fiber.

Google included a message to assure the people in Austin and Provo that this new expansion won’t detract from getting Fiber into their homes: “We’re still very focused on Kansas City, Provo, and Austin. Our discussions with these new cities will not impact our current operations in any of our existing Fiber cities, and we are continuing to build in those cities.”

Google is asking each city to complete a checklist with three critical tasks in order to be considered. First, Google wants access to use or lease existing infrastructure. They also want information about the existing infrastructure, as well as confirmation that the city can handle the complicated permit process for setting up a major system like Fiber.

It seems like a lot of work, but damn it, House of Cards is no good to watch interrupted by buffering. These cities have the right idea.

Google Fiber is an appealing alternative to the current cable and Internet providers, especially as use of data-heavy streaming services continues to grow in the U.S., since service can slow at peak hours, and many consider the pricing too expensive.

It’s so appealing that many cities went to outlandish lengths to petition Google to give them Fiber. Topeka, Kan. temporarily changed its city name to “Google.” An island in Sarasota, Fla. renamed itself ‘Google Island.’ Not to be outdone, the city of Rancho Cucamonga, Calif. called itself ‘Rancho Googlemonga.’

Update: A Kansas City resident emailed us to let us know Google Fiber is already up and running in part of town. So nevermind on that being-a-year-away-from-installing thing.