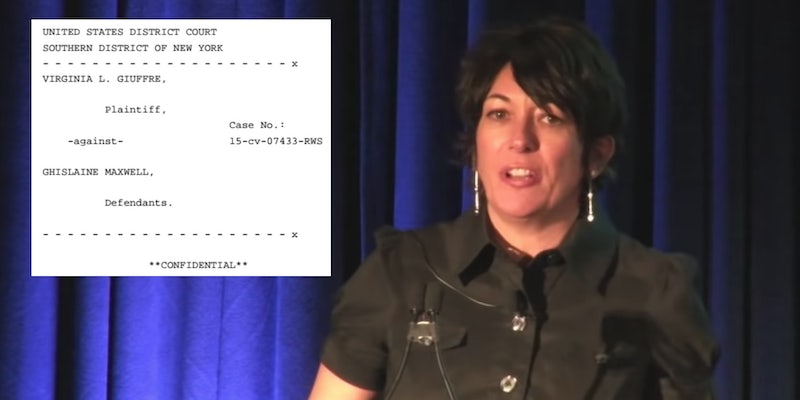 The accused sex trafficker was asked about everything from the CIA to Bill Clinton.

The transcript of a 2016 deposition with accused sex trafficker Ghislaine Maxwell was unsealed on Thursday, revealing new insights into the confidant of deceased sex offender Jeffrey Epstein.

The partially redacted transcript, which contains more than 400 pages, was released after a years-long battle in civil court between Maxwell’s attorneys and Virginia Robert Giuffre.

Maxwell was arrested last July on numerous counts related to sex trafficking and is currently being held without bail.

Here are 3 things you need to know about the deposition.

During the deposition, lawyers repeatedly asked Maxwell whether Epstein had worked with any U.S. intelligence agencies such as the CIA.

Epstein had repeatedly been accused over the years of having ties to numerous intelligence agencies including those outside of the U.S.

“Do you know if Jeffrey Epstein had any relationship with the U.S. government either working for the CIA or the FBI in his lifetime?” lawyers asked.

Attorneys also pressed Maxwell on whether Epstein had “any friends that are in the CIA or FBI” as well.

Unsurprisingly, Maxwell denied having any insight on the matter. Maxwell provided similar answers when asked whether Epstein had ever worked with Israeli intelligence.

“I have no knowledge of that,” Maxwell replied.

Maxwell was repeatedly asked about former President Bill Clinton, who famously flew on Epstein’s private jet, according to flight logs, as many as 26 times.

Clinton has alleged that he only took “a total of four trips” with Epstein in 2002 and 2003 to Europe, Asia, and Africa.

Giuffre, however, has accused the former president of traveling on Epstein’s plane to the billionaire’s infamous private island.

When pressed about Clinton’s alleged stay on the island, Maxwell defensively called the allegation “a flat-out total fabrication and lie.”

“Again, Virginia is absolutely totally lying,” Maxwell said. “This is a subject of defamation about Virginia and the lies she has told and one of lies she told was that President Clinton was on the island where I was present. Absolutely 1,000% that is a flat-out total fabrication and lie.”

After being asked if Clinton and Epstein were friends, Maxwell argued that they weren’t.

“I wouldn’t be able to characterize it like that, no,” Maxwell said.

When asked if the two were acquaintances, Maxwell stated that she wouldn’t categorize Epstein and Clinton’s ties.

One of the main focuses of the deposition surrounded allegations that Maxwell hired minors to give massages to Epstein and his associates.

Maxwell, who was responsible for hiring women such as Giuffre, denied ever knowing any of their ages.

When asked what the age of the youngest female employee of Epstein’s was, Maxwell claimed that she had no idea.

“I have not any idea exactly of the youngest adult employee that I hired for Jeffrey,” Maxwell said.

Maxwell vehemently stated that she “never” hired anyone under the age of 18.

After being questioned about Giuffre, who Maxwell says she first met at President Donald Trump’s Mar-a-Lago club in Florida, answers were similarly evasive.

Maxwell ultimately concluded that it was Giuffre who asked to work for her, not the other way around.

“Virginia Roberts held herself out as a masseuse and invited herself to come and give a massage,” Maxwell said.

Maxwell also skirted around a question surrounding allegations that Epstein had “sexual contact” with a 13-year-old.

“I would be very shocked and surprised if that were true,” Maxwell said.