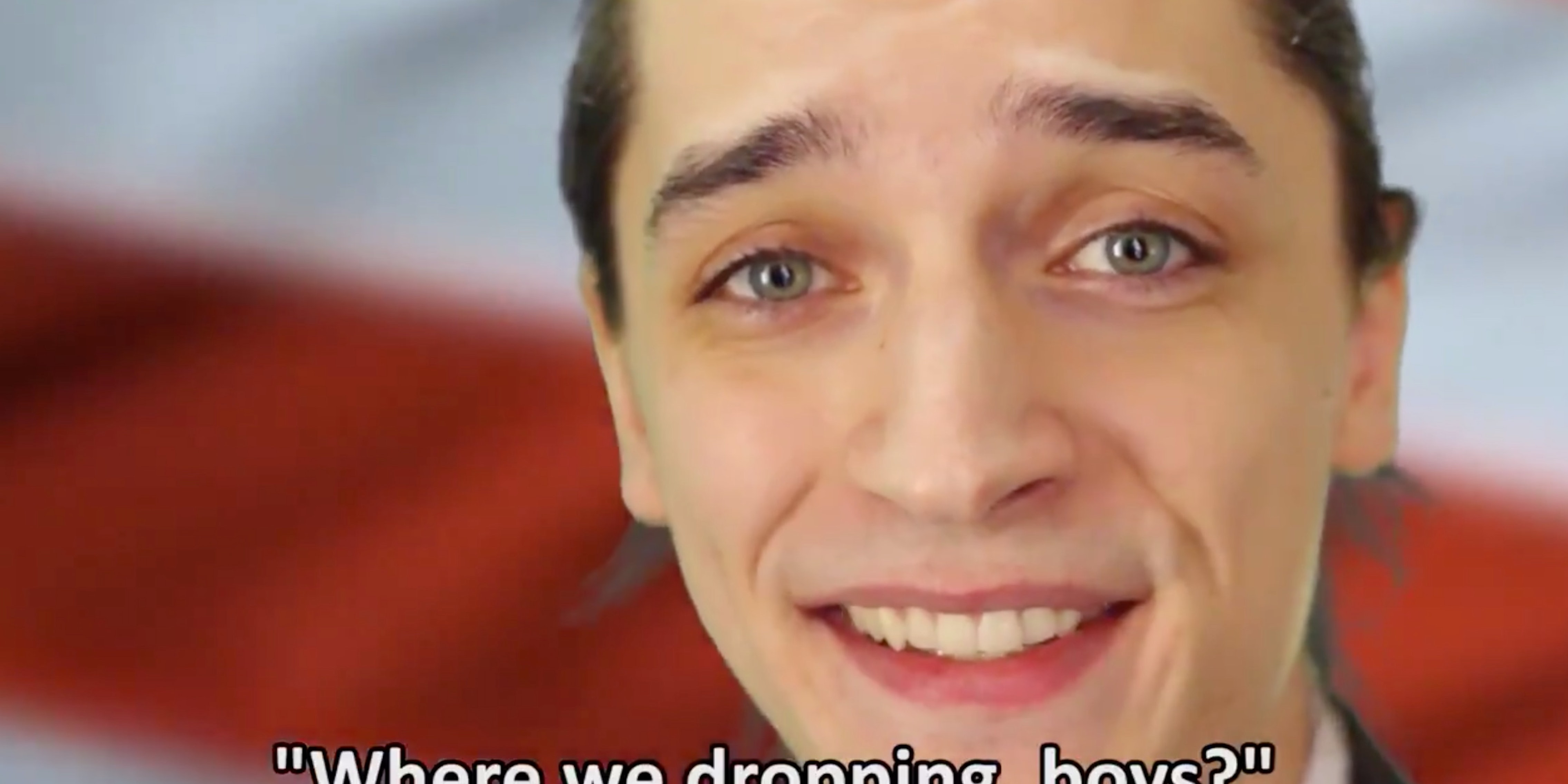 There is yet another candidate entering the 2020 race, but this one is actually trying to be a joke.

America, it’s time for a Gamer to be President. My name is Ace Watkins and I am ready to be that Gamer. I urge you to peep my announcement video and smash that retweet button. The future of our country depends on it. pic.twitter.com/RuT4pS65K2

Earlier this week, a Twitter account for “Ace Watkins,” a young man claiming he aspires to be “the first gamer president,” surfaced with the handle @GamePres2020. Within hours, Watkins had over 2,000 followers, and after several days, his follower count was over 40,000. This fake candidate actually has more followers than some actual presidential candidates.

I have more Twitter followers than "Presidential candidate" @JohnDelaney.

Of course, Watkins is a joke, a parodic character played by actor Phil Jamesson and created by the editors of video game humor site Hard Drive (a part of the Hard Times): Jeremy Kaplowitz, M.J. Amory, Kevin Flynn, Andy Holt, and Matt Saincome. The joke of a gamer president feels particularly resonant right now, with so many candidates vying for the Democratic nomination in this incredibly strange political moment.

The Daily Dot spoke with the team behind Ace about the character and the intersection of politics and gaming. They agree that the time feels right for a character like Ace. Holt says they created Ace after an earlier bit about a defense contractor getting into gaming showed them “how much people liked satire that mixes gaming and politics.”

Amory adds that he thinks Ace works because “we managed to find space between doing a political satire joke that has nothing to do with Donald Trump but also could only exist in a timeline where Trump is president.”

The first round of Democratic debates featured a number of white male candidates who made claims about identity that are as ridiculous as Ace’s claim that “our political system has treated gamers as an afterthought. Washington has ignored the unique skills of gamer Americans. That ends now.”

Rep. Eric Swalwell (D-Calif.) and Mayor Pete Buttigieg have tried to lay claim to a youth vote although neither of them necessarily appeal to young voters. Swalwell spent much of the first Democratic debate arguing that it was time to “pass the torch” before dropping out this week, while candidate Rep. Tim Ryan (D-Ohio) has claimed he wants to win the “yoga vote.”

Ace has striking similarities to a number of candidates in the race, but he most resembles Andrew Yang. Yang, a 44-year-old Silicon Valley entrepreneur, has launched a presidential campaign that combines elements of libertarianism and liberalism into a strange platform that feels tailor-made for your stereotypical gamer.

Immediately upon taking office, I will institute the Day One Executive Patch:

Ace’s claims that he will “legalize video games” and institute UBV (Universal Basic V-bucks) sound similar to Yang’s actual platform. Although he is best known for his support of universal basic income (UBI), some of Yang’s proposals, like “data as a property right,” “empowering MMA fighters,” “quantum computing and encryption standards,” and the “American Mall Act,” feel just as gamer-friendly as Ace’s.

For their part, the Hard Drive team rejects any specific comparison to an existing presidential candidate. Flynn says, “I don’t think of Ace as a parody of any presidential candidate. He rarely mentions his opponents or compares himself to them, and with good reason. He’s out of their league.” Jamesson is careful to make the distinction that Yang is more of a “memer” than a gamer.

Ace’s humor goes beyond any particular candidate, and he takes aim at the perceived politics of gamers as a whole. There is a long-simmering political culture among gamers and Silicon Valley that has taken shape in recent years. A particular style of cynical male libertarianism is associated with gamers. There’s Yang, and further to his right you have Gawker-slayer and Palantir (named, of course, after a Lord of the Rings reference) founder Peter Thiel and right-wing gadfly Ian Miles Cheong (@stillgray)—just to name two apostles of this ideology. Gamergate, the incel movement, and “heated gaming moments” are all incarnations of this ideology.

The Hard Drive editors reject this association and argue that this right-wing ideology is more of a fringe element than indicative of gaming writ large. Flynn says, “I feel like these are the dominant mental associations with gaming because there’s so much overlap between these problematic groups and gaming as a hobby, but it’s much bigger than that, and a more holistic perception of the community of people who are fans of video games as a whole outside of those bad elements is still forming.”

Holt believes Ace can be part of changing the conversation. “I think it’s less that video games have impacted politics, and more that games became an effective way for a really troubling political faction to get attention,” he says. “You’re seeing a lot of pushback against that recently, and I like to think Hard Drive and Ace can be a small part of that.”

Amory adds, “I think, like any medium, gaming is an empty vessel that allows for any politics to be attached to it. It just so happened that the alt-right/libertarian partisans got there first but there is no reason why it has to be exclusive to them.”

To their point, Twitch has seen a sharp rise in left-wing politics recently, as socialist and progressives have started to compete for the ideological loyalty of young disaffected gamers. The Young Turks’ Hasan Piker has over 100,000 followers on Twitch. Popular leftist podcasts Chapo Trap House and Struggle Session have launched streams. Even Sen. Bernie Sanders (I-Vt.) has a stream.

I have been called a leftist, a socialist, and communist. Call me what you want, but we all deserve to live in a world where the Adobe Creative Suite is free.

The Hard Drive team is careful to say they “believe in being funny first,” but they do describe themselves as “left-leaning.” In their view, the right-wing, libertarian, bigoted image that gamers have gotten in the public imagination is something worth fighting back against. Holt says, “I don’t think it’s a coincidence that a wide-open place like Twitch would be the place where a leftist gaming culture would take off—we have the numbers, just needed the right platform.”

They believe that the way to fight this toxic ideology is through comedy. Kaplowitz adds that, “Twitch is a ridiculously large untapped market for comedy … once comedians realize there is such a big, ravenous audience available to them on Twitch and it’s a platform built to make it easy for fans to give you money … everyone’s gonna be on there. So that’s why I think Chapo and Struggle Session and Dough Boys and Hard Drive are all running to Twitch.”

A few years ago, @GamerPres2020 might have been considered merely a good bit. But with the increased politicization and polarization of gaming and the dizzying absurdity of modern politics, Ace feels closer to reality than we might be comfortable with. And as the Hard Drive editors point out, it is easy than ever, and perhaps more important than ever, to make jokes about the politics of gamers.

On July 9, Ace joked that “a gamer president is inevitable.”

A Gamer President is inevitable. https://t.co/cQcsuGaUfH