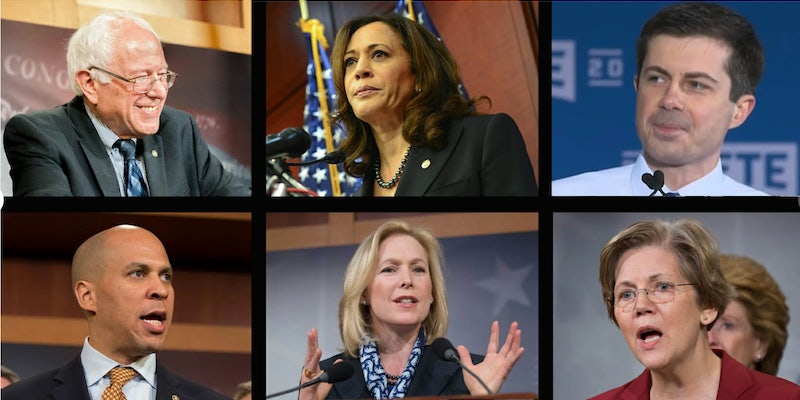 It’s spawned numerous reactions from left and right. Trump’s fans are declaring vindication, while others see Mueller having produced an outline for impeachment.

And the people who may one day face Trump in an election, 2020 Democratic candidates, already have a lot to say about the 400-page document.

The report was released to congressional committees and online at around 10am CT Thursday, following a brief news conference held by Attorney General William Barr. During the conference, Barr told reporters the report showed no collusion.

“That is the bottom line … the Special Counsel confirmed that the Russian government-sponsored efforts to illegally interfere with the 2016 presidential election but did not find that the Trump campaign or other Americans colluded in those schemes.”

Throughout the morning, 2020 Democratic candidates sounded off against the news conference and the fact that it took place before the report’s release.

They also shared concerns regarding Barr himself and the report’s lofty amount of redactions—over a dozen pages are completely redacted or close to it, with other pages blacking out full paragraphs.

All morning—before and following Barr’s remarks—Democratic candidates spoke out against the attorney general’s move to host a press conference before the report was made public.

“It’s a disgrace to see an Attorney General acting as if he’s the personal attorney and publicist for the President of the United States,” Elizabeth Warren tweeted about Barr’s news conference, adding that the “American people deserve answers.”

This is a disgrace. The American people deserve answers—and Special Counsel Robert Mueller should testify publicly before Congress. #ReleaseTheFullReport pic.twitter.com/ROG0Bt6JVq

Booker also linked to a searchable version, claiming the Trump administration was trying to make it harder read with the version they released.

The Trump administration posted an unsearchable pdf of the Mueller report so it would be harder for you to read.

We made it easier. Here’s a searchable version: https://t.co/0QWPT5IQVP

Frontrunner Sen. Bernie Sanders (I-Vt.) accidentally misspelled “Mueller” in his own release about it.

Typo aside, he called on Congress to continue its investigation.

“It is clear that Donald Trump wanted nothing more than to shut down the Mueller investigation… Congress must continue its investigation into Trump’s conduct.”

He also demanded Congress work to protect future elections against foreign interference, calling on “President Trump and Republican leadership to stop obstructing the necessary work to protect our democracy.”

Mayor Pete Buttigieg, who has been slowly creeping up the polls, called it “disturbing, if not completely surprising,” and proof of why the country needs to “change the channel in 2020.”

The Mueller report is a disturbing if not completely surprising collection of evidence that shows a president putting his own interests ahead of the country’s. Today again demonstrates why we need to change the channel in 2020.

Candidates including Warren, Kamala Harris, and Amy Klochubar made it known that they wanted to hear about the report straight from the man who conducted the investigation, instead of Barr.

“We want to hear from Director Mueller himself,” Klochubar said in a video she released through Twitter. “He should be able to give us his own views of what happened … he’s the one that conducted this major investigation and he’s the one, not Attorney General Barr, that should answer the questions of America.”

We want to hear from Director Mueller himself. pic.twitter.com/O1DYnsAKlm

Pinned to the top of Harris’ Twitter page is a link to a petition started by her presidential campaign, calling for the release of an unredacted report.

Also troubling candidates, during the news conference, Barr stated that President Trump’s lawyers received access to the report earlier in the week—before Congress or anyone else would have access.

Candidates including Gillibrand and Swalwell made sure to point that out on social media.

“I’m deeply disturbed that Barr briefed the [White House] on the Mueller report’s findings ahead of its public release,” Gillibrand tweeted. “The [Attorney General] should represent the American people, not the president or the White House.”

In a statement where he also called for Barr’s resignation, recent addition to the 2020 candidate pool Eric Swalwell said, “you can be the president’s defense attorney or America’s attorney general, but you can’t be both.”

Democratic candidates who have remained mum on the topic so far include Beto O’Rourke, John Delaney and former Vice President Joe Biden.