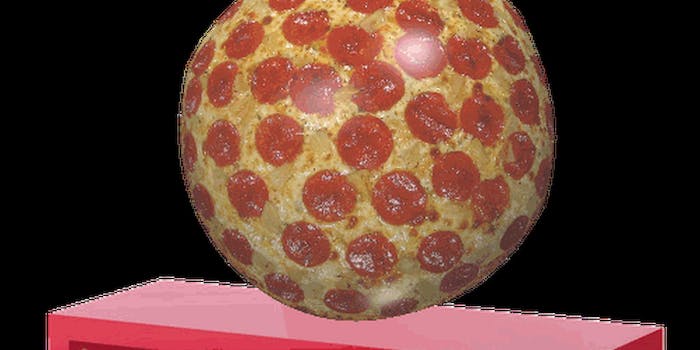 The lost art of GeoCities GIFs

With his simplistic designs and retro appeal, Nick Kegeyan is recapturing the essence of GeoCities GIFs.

During the 1990s, Web-hosting service GeoCities was one of the most visited sites on the Internet. The site was considered to be the first step toward the modern-day social network, with people blogging about their favorite TV shows, starting their own communities, and posting shoddy GIFs like an American flag blowing in the wind or the Earth spinning on its axis.

After collecting 38 million pages, GeoCities closed in 2009, marking the end of an era and the destruction of innumerable GIFs.

Many of these pieces of art history have not been entirely lost, however, thanks to the tireless work of Nick Kegeyan, a lifelong student of the Internet who, as Tumblr artist extracrispy, is bringing back the GeoCities GIFs with style.

Kegeyan’s animations capture the essence of ‘90s computer art, often featuring floating images of food, bright 3-D shapes, and obnoxiously large text bouncing from side to side. The works come across more often as old screensavers, not modern art, and thanks kind of the point.

“I had a GeoCities site and I kinda never really thought that it would be something I would revisit,” Kegeyan, who’s had a computer since he was 7, told the Daily Dot.

“I spend a disgusting amount of time on the Internet so I guess it’s the natural progression  to go retro, I guess. I just like the aesthetic and the simplicity of it.”

The inspiration behind many of his GIFs is similarly simplistic. Sometimes it comes from looking through a 25GB folder of images on his desktop or from just turning on the TV.

“If you read the titles of my pieces, they’ll be really random,” Kegeyan said. “I’ll just be sitting and watching Law and Order: Special Victims Unit and be like, ‘Mariska Hargitay, hey, you inspired this piece somehow.’

As an artist whose work is steeped in nostalgia and Web history, Kegeyan took particular interest in a recent article from Quartz’s Zachary Seward, titled “Actually, the GIF is dying.” The reports states that the GIF, which recently celebrated its 25th anniversary and was declared America’s “Word of the Year,” makes up “29% of all images on the web’s million most popular sites, down from 41% two years ago.” Seward contends that at the current rate, “GIFs could practically disappear from the web by the end of this decade.”

Kegeyan agrees with Seward on the fact that the PNG image format is far superior to the GIF, considering it is more flexible and can be animated like a GIF (but often requires a browser plugin for the animations to work). Where the two don’t agree is on the method in which the statistics were gathered in the first place.

“On Tumblr, each GIF is only posted one time to their server. Reblogging the image doesn’t create a new file,” Kegeyan said. “I don’t think it’s going to disappear unless we can replace it with something else. I think if the animated PNG gets the notoriety it deserves, we can see that happen.

“But for right now, the GIF is pretty safe.”

With acclaimed artists like Kegeyan at the forefront of the GIF resurgence, it always will be.