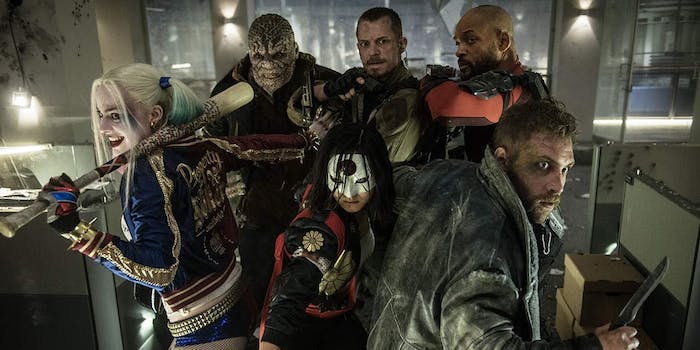 The Razzies' shortlist leaked on the Internet this week, and it's predictably terrible.

The Golden Raspberry Awards, now approaching their 35th year of doling out dubious honors to Hollywood’s worst, just leaked their shortlist on the Internet in anticipation of next week’s list of nominees. At a glance, it’s traditional Razzie fare. They’ve identified an actress over 40—Cameron Diaz—to kick while she’s already on her way out the door of an industry that already doesn’t have a place for aging women. They’ve opted not to target the genuinely worst movies of the year, but rather the ones most likely to draw the most Internet attention to their increasingly bitter roast of the entertainment industry. The awards continue to be surrounded by a crass and juvenile air, but what can you expect from a production named after flatulence?

But if you did more than just glance at the shortlist this year, you might have noticed that the Razzies—which were already toeing the line of good taste—just took an enthusiastic jump into the deep end of moral opprobrium. The list repeatedly refers to Transformers: Age of Extinction as Trannies #4, a joke that is at least as unoriginal as it is offensive. If there was ever an indication that the Razzies have become worse than the Hollywood elite they love to lampoon, it’s this: Last year, Laverne Cox became the first openly transgender actor to receive an Emmy nomination and this year, the Razzies proudly published an anti-transgender slur. And make no mistake: Broadcasting transphobia under the guise of punching up is still punching down.

The Razzies’ problems run far deeper than the fact that their jokes are starting to wear thin.

With this latest offense in mind, there’s never been a better time to re-evaluate the entire premise of the Razzies altogether. Writing for Yahoo! Movies this week, Gwynne Watkins argues that it’s time for the Razzies to retire because “they’ve become a retread of popular and critical opinions that have already been widely published online.” Watkins also cites the predictability of the Razzies’ targets as a sign that the whole schtick has grown tired. How long can mocking Adam Sandler remain funnier than, say, a recent Adam Sandler movie? Sam Adams at Criticwire agrees with Watkins, calling the ceremony “a tiresome ritual we can’t seem to escape.” But maybe we can escape it and maybe we should because the Razzies’ problems run far deeper than the fact that their jokes are starting to wear thin.

Since their inception in 1980, for example, the Razzies seem to have particularly zeroed in on black entertainers. By my count, they have given at least 14 acting Razzies to black actors including Prince, Eddie Murphy, Halle Berry, Tyler Perry, Dennis Rodman, Will Smith, Rihanna, and the Wayans brothers. Even Mel B got a share of the 1998 joint Worst Actress award given to the Spice Girls for 1998’s Spice World. For comparison, consider that only 13 black actors have received Oscars for their work since 1980. You heard that right—for the last 35 years, the film industry has given black actors more of its worst awards than they have its best. That’s a sentence that reveals so much about Hollywood: how infrequently it recognizes black actors, how few black roles are created in the first place, and how harshly black actors are judged for their work in this environment.

It’s not that Norbit wasn’t actually bad—it was—or that Catwoman was secretly a cinematic masterpiece—it wasn’t—but it is the case that the Razzies blithely proceed as if there aren’t social forces at work like, say, Hollywood’s completely obvious racism, that makes it incredibly difficult for black actors to land good roles. And it’s not that black people shouldn’t ever get Razzies so much as the practice of giving out worst awards in the first place is a really tricky thing to do in an industry that still marginalizes non-white, non-male actors.

Sure, the Madea movies aren’t great, but name a Woody Allen comedy with more than one black person in it off the top of your head.

For example, when when the Razzies really go after certain black-directed comedies—as they did when they nominated White Chicks or Madea’s Witness Protection for 5 awards each—it’s a little hard to stomach, not because these are excellent films but because they’re some of the only mainstream black-dominated films that are able to get made. As Chris Rock wrote for the Hollywood Reporter, “there are some instances where there’s a black audience laughing at something that a white audience wouldn’t laugh at because a black audience is really just happy to see itself.” Sure, the Madea movies aren’t great, but name a Woody Allen comedy with more than one black person in it off the top of your head. I’ll wait. Can you even do it if I lower the number to just one?

The Razzies also seem fond of hitching their wagon to the latest and most fashionable female celebrity hatefest. Kim Kardashian got a Razzie last year just as the anti-Kim K sentiment was starting to reach fever pitch. Paris Hilton has four of the damned things. Lindsay Lohan clocks in at four Razzies. In 2011, the Razzies expressed their loathing for the cast of Sex and the City 2 by giving all four main cast members the award for Worst Actress, as well as the Worst Screen Ensemble trophy.

Sure, the Razzies stick it to male actors, too, but they’ve always seemed to dig into women with an inordinate amount of relish. When a Judd Apatow movie tanks—Year One, anyone?—it barely registers on the Razzie radar, but if women flock in droves to a poorly-reviewed movie like the Sex and the City sequel, they nominate it for every category they can find. I’m no scientist, but I think they call that a double standard.

Overall, the Razzies are the sort of enterprise where you can confidently guess that there’s an older man at the helm and you wouldn’t be wrong. The awards were started informally by publicist John J.B. Wilson at a house party in 1980, and he has remained in a leadership role as the ceremony has grown in size and scope. The Razzies are now something of an informal club with membership dues that you can pay to feel a false sense of superiority over the common man; in other words, it’s sort of like Freemasonry for movie snobs.

Wilson and the Razzies do not seem racist or sexist in the sort of instantly recognizable way that could explicitly called out and universally recognized by most liberal moviegoers, but between the “trannies” joke, the lady hate, and the way the awards can latch onto certain black-led films, it’s hard not to feel like they are coming from a perspective that has been rendered invisible by a position of privilege.

The Razzies have become the equivalent of watching Enter-tainment Tonight with your grandpa, except that it’s gone on for 35 years instead of 60 minutes.

Fellow Daily Dot contributor Jaya Saxena recently described the game Cards Against Humanity by noting that “the bar for acceptable crudeness is set by college-educated white guys” and the same definitely seems true in the case of the Razzies. Like Cards Against Humanity, the Razzies postures as an objective, detached, equal-opportunity offender, but if you trace the outline of its assumed audience in reverse, you realize that it primarily seems to make fun of people who make easy fodder for educated white male moviegoers. The awards assume a de facto audience that’s already predisposed to hate Kim Kardashian and that thinks the hubbub over Sex and the City is just women being silly. In essence, the Razzies have become the equivalent of watching Entertainment Tonight with your grandpa, except that it’s gone on for 35 years instead of 60 minutes.

And a grandpa who hates Kim Kardashian is probably among the worst person to critique an industry that is already rife with inequality. Much like a real grandparent who believes in the myth of meritocracy, the Razzies implicitly operate as if everyone in Hollywood is working on equal footing, and they, therefore, assume that anyone who turns in a bad performance is fair game. But giving out demerits in the form of spray-painted statues, however jokingly, is still a form of punishment in an industry that can already be punishing for anyone who doesn’t fit a particular mold. The Razzies started out as a scrappy little party to deflate some of hot air. But when you garner national media attention while also using slurs and regularly targeting movies made for demographics outside your own, you’re not a little pup anymore, you’re one of the big dogs.

And after broadcasting a joke like Trannies #4 to the world, maybe it’s time for the Razzies to make one last award for Worst Awards Show, give it to themselves, and retire already.