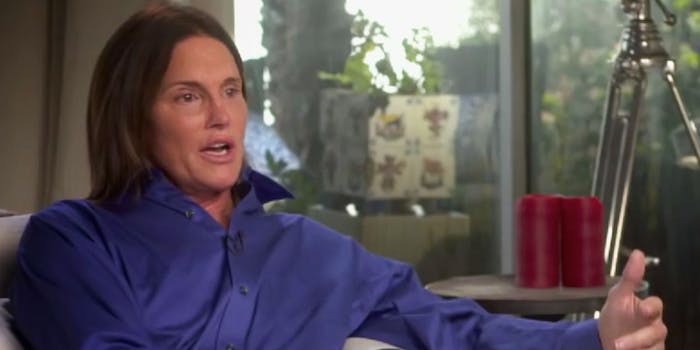 Respecting Bruce Jenner and Chelsea Manning could save lives

By this point, all journalists should understand the basics of how to report on transgender people.

The amount of handwringing done by Tod Robberson in yesterday’s Dallas Morning News on the difficulty of reporting on transgender people would be hilarious, if there weren’t so many deadly and immediate consequences to his logic.

Robberson spends most of his column arguing that accurate and respectful reporting on transgender identities is just too difficult or confusing for him and his readers to understand, much less abide by. Referring to Bruce Jenner, who recently came out as transgender in an interview with Diane Sawyer, he also argues that retconning someone’s gender identity obfuscates the truth; thus, if Jenner competed in the 1972 Olympics but later changes his name to Beverly, he should always be referred to as “Bruce” when discussing his ’72 medals.

In a series of staggeringly obtuse misrepresentations, Robberson reveals he has no idea what “gender” even is:

The New York Times and Associated Press, among other news organizations, have decided that they will recognize the gender preference of transgenders in news copy. Which is to say, when a male who has yet to undergo gender reassignment surgery nevertheless calls himself a female and is the subject of a news story, he will be identified as a female in all references.

Thus, if I were to correctly rewrite the previous sentence to conform to AP and New York Times style, I should have written: “Which is to say, when a female who has yet to undergo gender reassignment surgery nevertheless calls herself a female and is the subject of a news story, she will be identified as a female in all references.”

See how confusing that gets? What is the actual, at-birth gender of the person we’re talking about? And what gender will the person be identified as, once reassignment surgery is completed? Who knows?

He then goes on to hold a very serious discussion with himself about the nuances of bathroom stall usage.

Apart from his condescending use of “transgender” and “female” as nouns, Robberson’s wording inaccurately implies that the gender assigned to a person at birth is the “correct” gender. Gender and gender performance are socially constructed ideas that happen to be built around reproductive biology—but those roles and body parts are entirely separate. To be genderqueer, gender neutral, or transgender is simply to understand that for whatever reason, the role you were assigned at birth doesn’t apply to you, and there may be other roles, or another gender, that fits you better. Whether or not the individual in question has had gender reassignment surgery is irrelevant.

This isn’t that difficult a concept to grasp. In a separate example, Robertson attempts to remind us, “The Army service member who dumped thousands of classified documents onto the Internet via Wikileaks was not Chelsea Manning. It was Pfc. Bradley Manning.” He also asks, “Does our devotion to the language of acceptance require us to misinform the public?”

However, the idea that a simple retconning of Chelsea Manning‘s given name somehow erases or obfuscates historical accuracy is ridiculous. The original Star Wars didn’t immediately cease to exist or have meaning the moment George Lucas decided it was now going to be called Episode VI. We have no problem rewriting cultural history or acknowledging previous moments of historical inaccuracy, such as Pluto‘s demotion from planet status. Hell, the media had no problem accepting, for years, the unpronounceable first name of the artist formerly known as the artist formerly known as Prince. We still call Marvin Lee Aday “Meat Loaf” instead of the singer’s given name.

If we can adapt to these kinds of changes, why on earth should it be so difficult to switch name and pronoun usage when it’s expected of us?

Editorial style guidelines, common courtesy, and historical precedent all point towards journalistic acceptance of the preferred names and pronouns of transgender individuals. Most crucially, it’s a matter of basic respect for their humanity to allow them, not us, to define and dictate the way their gender identity is represented in the media—particularly since this allows us to focus on more important issues, like the news they’re making.

The more we can enforce this idea as a general practice, the more we foster a social sphere where transgender identity is respected, accepted, and most importantly, protected. This may sound like an overly simplistic or obvious goal, but it’s not.

While writing about the recent death of Mya Hall, I was shocked and dismayed by the number of major media outlets which had misgendered her, described her as a “man in drag” or as a “cross-dresser,” and reported the circumstances of her death with transphobic details. In like a moralizing, victim-blaming article, the Washington Post focused on her identity as a street worker: “heels too high, shorts too short, shirts too tight, wigs too big, makeup too heavy.” The emphasis on artifice was heavily implied—as if the identity of trans women only exists when the makeup is on.

you should, as a journalist, know by now that the term is "transgender," not "cross-dresser" or "transvestite." you should know pronoun use.

Robberson argues that “choosing the correct [pronoun usage] shouldn’t be an option selected out of a sense of inclusion or demonstration of open-mindedness.” But this logic places the burden of assigning gender on the community rather than the individual whose gender is under scrutiny. When we as journalists refuse to allow individuals to identify themselves, we contribute to a very dangerous social view of transgender identity.

It’s been just over four months since 17-year-old Leelah Alcorn took her own life, citing deep hopelessness, society-wide transphobia, and frequent media mockery of pre-transitioned individuals as factors in her decision. The actions we take as journalists have consequences.

Every excuse Robberson makes prioritizes his personal comfort over the many, many obstacles transgender individuals face in society. These obstacles are extreme, and they aren’t getting better. The rates of bullying, suicide, violence, homelessness, job termination, hate crimes, and the murder of trans individuals are all staggeringly high:

These rates of violence are so high precisely because it’s so easy to strip transgender men and women of their right to have any say in their own gender identity. When we refuse to use preferred names and pronouns for trans individuals, we deny them agency over their own identities and their own lives.

And this denial is, to be blunt, slowly killing them.

It’s easy for statistics this grim to be overwhelming, and perhaps that makes it easier for Robberson to ignore their implications when he asks, “What role does journalism have in this public discussion?”

These rates of violence are so high precisely because it’s so easy to strip transgender men and women of their right to have any say in their own gender identity.

This is a deeply important question. Journalism’s role should always be to support human rights and work to enhance the quality of life for all individuals. And yet it’s barely been 18 months since the notorious Grantland article, arguably journalism’s single greatest instance of transphobia, which may have caused its subject, Dr. V, to take her own life prior to its publication. Dr. V committed suicide after a Grantland reporter outed her as trans against her will to one of her company investors. In his article, he misgendered her, revealed her birth name, purveyed her “real” identity as a teasing mystery, and exploited her death. No one who edited the story thought to second-guess these decisions, nor to have someone who identified as transgender read and assess the story.

Robberson should already know this. Instead, he claims that “the orders came down from on high one day” to accept transgender folks and begin using correct trans names and pronouns, as though the impetus to do so was a matter of societal whim.

Outside of journalism, the major turning point for transgender identity in the arena of public discussion was the 2013 release of the American Psychological Association’s DSM-V, which after many years of scholarly debate and discussion finally finalized the declassification of transgender identity as a mental disorder. This basic shift reflected growing awareness of transgender issues and the dire need to address the many issues caused by societal transphobia.

As journalists, it is our responsibility to report on those issues while also reflecting and evolving with these societal shifts—and above all, while upholding and supporting human rights.

Instead of throwing up his hands at progress, Robberson should be asking what role journalism could have played in preventing the 2015 suicides of at least 7 people, including Eylül Cans?n, Zander Mahaffey, Melonie Rose, Aubrey Shine, Ash Haffner, Blake Brockington, Taylor Alesana.

As journalists, it is our responsibility to report on those issues while also reflecting and evolving with these societal shifts.

Curbing that violence is what’s at stake when we refuse to uphold and accept transgender lives. When we misgender the subjects of news articles, we make it harder for trans men and women everywhere to be accepted on their own terms.

Thankfully, narratives of transgender identity are changing, and new heroes are emerging to give the lie to the myth that to be transgender is to be doomed to a life of suffering. But transgender violence is real. Lack of acceptance is real. Switching pronouns, respecting name preferences, and allowing people to self-define their genders promotes acceptance and safety for trans and genderqueer people.

As journalists, it’s not just our right to enforce this switch in how we think and interact with transgender identity. It’s our duty.