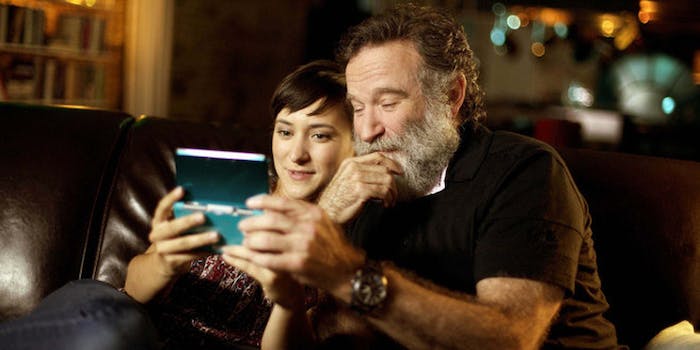 Even when a beloved comedy legend dies, the Internet is still a terrible place.

And while they circle endlessly, like sharks, they really come out in force when they sense blood in the water, as happened this week with the death of Robin Williams. As the Internet went into a mass collective spasm of grief, the vultures gathered, picking at his family, saying horrific things about mental illness, and threatening to picket at his funeral.

While fans left tributes of flowers, cards, and more at the San Francisco home made famous in Mrs. Doubtfire, the haters were waiting. And, as always, they fell into utterly predictable subgroups.

1) Those attacking the family

Robin Williams’ daughter was actually hounded off Twitter and Instagram by vicious comments and images that left her “shaking.” This is an issue that’s frequent when high-profile individuals lose family members, or when someone famous dies and family members are active on social media. Something about this situation seems utterly compelling and fascinating to abusive people, who swarm to drown already grieving people in hatred and vitriol.

Some focused on spreading gory images (which were not, as they claimed, pictures of Williams), while others attacked her for not having enough pictures of her father on her social media accounts, implying that this indicated she didn’t love her father enough. In a statement on Instagram, she said that:

I shared him with a world where everyone was taking their photo with him, but I was lucky enough to spend time with him without cameras, too. That was more than enough, and I’m grateful for what little time I had. My favorite photos of family are framed in my house, not posted on social media, and they’ll remain there. They would’ve wound up on the news or blogs then, and they certainly would now.

It’s not enough to claim that abortion causes depression among women, a theory that’s been thoroughly debunked in numerous research studies on the subject. While this canard often gets trotted out in an attempt to undermine women’s reproductive rights, it also appears in a truly bizarre context in connection with the deaths of celebrities.

Life News—not exactly known for its balanced, sympathetic, fair journalism—posted an exploitative piece almost immediately after Williams’ death suggesting that his depression and suicide stemmed from sorrow over the “abortion of his unborn child” in the 1970s. Despite the fact that Williams has spoken openly about the abortion and how he and his partner decided together that they weren’t ready to have children (and had made the right choice), the anti-choice website felt obliged to blame abortion.

Worse yet, the site distorted quotes from a 2008 interview about his struggles with addiction, turning them into regrets about abortion instead of a frank and open discussion of his alcoholism. “You know, I was shameful,” he said, talking about how he behaved while drinking. “You do stuff that causes disgust, and that’s hard to recover from. You can say, ‘I forgive you’ and all that stuff, but it’s not the same as recovering from it.”

Fascinatingly, the article was later pulled down. Apparently even Life News can recognize when it’s crossed a bridge too far.

Think you can’t possibly shoehorn Williams into a political campaign? Think again. Doktor Zoom at Wonkette reported that Chris Fields (R-MN) replied to a politician’s remembrance tweet from her personal account with a suggestion that voting Republican would “really bring back the good times,” as Zoom put it. Fields then managed to embroil himself in a Twitter war as people were understandably put off by his Tweet and he dug in his heels over the whole voting Republican thing.

Because nothing says political sensitivity and awareness like turning someone’s death into a political talking point.

Conservative talk show host Rush Limbaugh gets his own special troll category, after years of honing being an utterly insensitive horrible person into an art form that transcends mere mortals. He blamed, of course, liberal thinking, suggesting that Williams was trapped in a spiral of liberal self-defeatism and, of course, the eternal victim complex that characterizes liberalism.

“A leftist worldview,” he said, is “one of pessimism and darkness, sadness. They’re never happy, are they?”

Williams was effectively a whiner, he suggested, ripping into Williams’ financial distress early in his career and sneering at his struggles with finding roles that helped him pursue his dreams. Then he mocked Williams’ sorrow over the loss of friends who had died young, flinging the term “survivor’s guilt” around to further belittle the very real issues Williams struggled with throughout his life.

Those seeking gory details had their needs amply met by the media, which eagerly promised pictures of the home where Williams died, exclusive images of his last months, coverage on Rebecca Erwin Spencer, the woman who found the body, and so much more. While sifting through every lascivious detail, they made sure to share with the world, for who wouldn’t want to speculate endlessly about the death of a fellow human being?

The frenzy of public attention over Williams’ death has only intensified as more details are released (and leak), creating what must be an unbelievably stressful situation for members of his family who would prefer not to have the details of their loved one’s life smeared across the media.

It’s also been difficult for many people with mental illness working in the media as well as those who use social media and try to follow current events. The deluge of suicide-related commentary and speculation is everywhere: Facebook, Twitter, Instagram, and in every newspaper. It’s nearly impossible to escape, making it difficult for those who need to take a mental health break to find a place of respite without utterly isolating themselves—which is exactly what they don’t need.

Labeling Williams as a “fag pimp” for his work on films like Mrs. Doubtfire and The Birdcage, the Internet’s most reliable trolls announced their intention to show up at the beloved pop culture icon’s funeral to denounce the man who “made merchandise of filthy proud sin.” One wonders if perhaps the Patriot Guard Riders would be willing to volunteer in this instance—while their mission doesn’t address people like Williams, his contributions to society, and the probable size of his funeral, might be grounds for making an exception.

As we collectively explore the death of this well-known public figure, the trolls who turn it into an endless spectacle feed both on the news cycle and on our responses to them, as they always do in cases like this one. They’re a reminder that wherever we go, hate seems to follow—making it all the more imperative that we fight it.