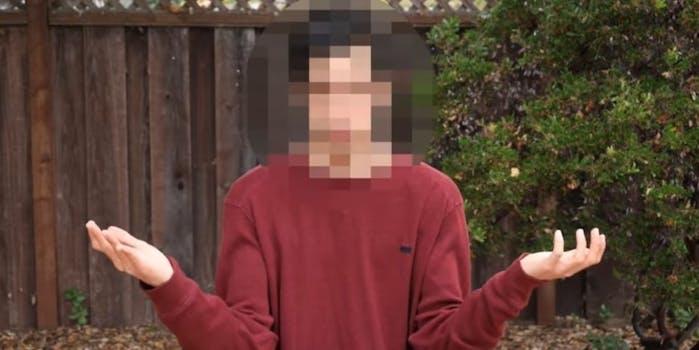 YouTube time traveler reveals it was a hoax all along

Will the real Noah please stand up?

Three days after Noah, the supposed YouTube time traveler who became a hugely popular fixture on the ApexTV channel said it was all a hoax, another person has stepped forward to reveal himself as the “real Noah.”

The YouTube persona has become an internet fixture who has generated millions of views.

But on a video uploaded to the official ApexTV channel on Tuesday, Noah revealed his face and said his real name is Jason. The other previous Noah who uploaded a now-deleted video last Saturday said his name was Denis Bel and that he was 16 years old.

Bel said he first was in contact with ApexTV—which has become a platform for supposed time travelers and other paranormal content—when he was 14 with his fake story and that ApexTV tried to get him and his parents to sign a non-disclosure agreement.

“I can’t do this stupid character anymore,” Bel said. “I have to get rid of this looming that’s above me that keeps making me scared of being exposed. … I know ApexTV is going to be flipping once he sees this video because he knows I’m actually revealing everything.”

Instead, ApexTV released its own video with its own version of Noah, played by a young man who said his name is Jason. According to Jason, he was getting bullied in school almost every day and was struggling with his sexual identity. He said he didn’t have any close friends. But he became obsessed with YouTube and began constantly emailing ApexTV claiming to be a time traveler. After sending a number of videos detailing his fake claims, Jason said he was surprised to see one get posted to ApexTV.

“I couldn’t believe it,” he said. “Just like that, I was a famous time traveler.”

Originally, Jason only planned on making one appearance, but he said he was validated by people who commented on his video, so he recorded more and eventually sat down with ApexTV for multiple interviews and vlogs.

“I honestly never meant to hurt anyone,” Jason said. “I know it’s really easy to say what I did was horrible. But after that first video, it became a really unhealthy addiction.”

He also passed a so-called lie detector test on camera, but on Tuesday, he said, “it was a combination of me actually believing my story and the medication I was taking to be more calm. Plus, the lie detector [ApexTV] used wasn’t exactly the best.”

Since Jason was featured so much on the channel, he became a fixture, making claims that Martin Luther King’s granddaughter would become president and showing off a map of the U.S. in 2030.

“It was a story people could follow,” ApexTV told the Daily Dot in 2018. “He kept coming back for more interviews. He kept telling us he couldn’t do anymore. Then, we’d get another email, and he’d want to reveal more about the future, or so he claims. He became a character in a way.”

“I have seen my story translated into so many languages I can’t keep track,” Noah told the Daily Dot in an email last year. “I don’t know why some people like me, but I am very grateful for everyone that does.”

ApexTV did not immediately respond to a Daily Dot request for comment on Wednesday morning about the two supposed Noahs and how this reveal would affect future videos on the channel. But ApexTV wrote on the YouTube video description that “this will in no way change the type of content we will continue to bring you” and that other supposed time traveler videos would be produced.

“I want to believe there are other time travelers out there,” Jason said in the video. “But I’m not the best actor, and people still believed me. … Just keep an open mind.”