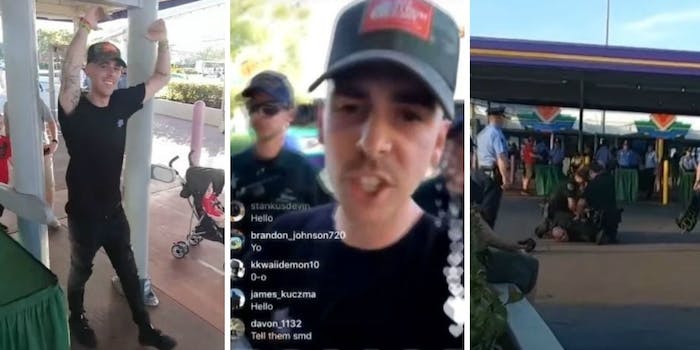 He says Disney security tried to steal his belongings.

YouTube star ImJayStation was arrested at Disney World last weekend after getting into a verbal confrontation with park security and the police—and the YouTuber who has 1.8 million subscribers vlogged the entire experience.

Police said, via the Orlando Sentinel, that they were called to the Disney transportation center after the YouTuber, whose real name is Jason Ethier, became irate and aggressive when his bag went missing.

They eventually arrested him and charged him with trespassing and resisting arrest without violence.

Ethier said he and fellow YouTuber TheFAM were in Florida filming haunted vlogs for future content, and since it was Ethier’s lifelong dream to go to Disney World, the two tried entering the park on Sunday evening. At a security table, Ethier said he put down his bag with his $3,000 camera inside so it could be inspected. After he went through a metal detector and turning his back on his possessions “for literally five seconds,” he said his bag, the camera, and a number of YouTube videos that were on the camera went missing.

TheFAM had started recording the incident, but Disney security said he couldn’t film there and made him delete the footage.

Disney said it told the 28-year-old Ethier he could call lost and found to retrieve his belongings. In the video below, Ethier said he still hasn’t retrieved his camera because police are temporarily holding it for evidence.

After police told him to leave the park, Ethier began recording and was then arrested.

I only have this pic.twitter.com/kdhSCz8xsE

Ultimately, Ethier is claiming Disney security conspired against him to take his bag, and he said Disney and the police “have done nothing but lie in this entire thing, and if I didn’t have any video evidence, I would be screwed.”

Ethier was eventually released on a $1,200 bond.

In the arrest report obtained by ClickOrlando.com, Orange County police wrote Ethier “was extremely upset due to the fact his bag was taken by another guest at the park by mistake.” The officer also said he was an “irate individual” and was “verbally aggressive.”

More from the police report:

Mr. Ethier stated to me multiple times he was going to sue me and I was a pion. He then went on to ask me how much money I  made and I couldn’t afford to be sued because I have nothing. He also explained this is why everyone hates American Police. He then told me this was going to come full circle and he is very powerful. I asked him if he was threatening me and he became defensive once again. This verbal barrage would continue for the duration of my time spent with Mr. Ethier. A trespass warning was completed and submitted into evidence. Mr. Ethier[‘s] bag was located and placed into evidence for safekeeping.

As you can see from his video, which was posted Wednesday, Ethier is still irate.