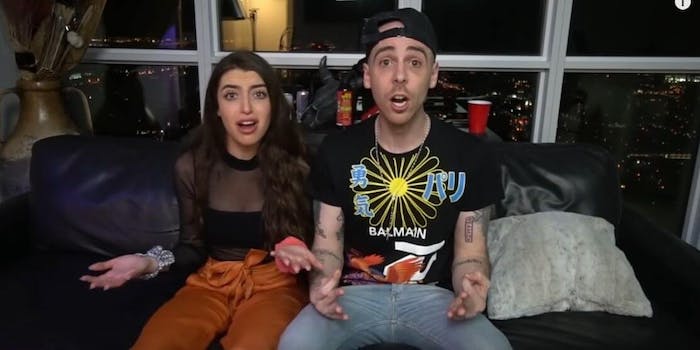 He says police showed up to his door.

Controversial YouTube star ImJayStation, who made waves last week by making videos about the apparent death of his girlfriend, now says Alexia is alive and actually helped him make those vlogs. He also says his significant other has accused him of assault with a weapon and that there’s a warrant for his arrest.

In a 24-minute video published on Sunday, ImJayStation, whose real name is Jason Ethier, said he was going to tell the truth about Alexia and why they pretended that she had died.

Last week, Ethier—who previously had been blasted online for exploiting the deaths of rapper Mac Miller and YouTuber Etika—said Alexia had been killed in a car crash. Soon after, he uploaded another video that showed him visiting what he said was a roadside memorial of her. Throughout both videos, he plugged their jointly produced YouTube channel Dream Team and said her goal had to been to reach 1 million subscribers (it currently has 335,000).

But in a new confession, he says it was an elaborate ruse.

In the video titled, “ALEXIA MARANO *THE TRUTH ABOUT HER*” Ethier showed a deleted scene from a vlog involving the “dead” Alexia and a Ouija board, where Alexia was with Ethier as they set up the video. She used trickery off-camera to make an object fall and make it appear as if something supernatural happened.

Ethier says after staying up until 8am to edit that video, he woke up that afternoon to discover that Alexia had broken up with him and left for good because her parents were so upset about the videos of her fake death. Soon after, he recorded a conversation with police at his front door and said he had been accused of assaulting her with a weapon. Now, he says he can’t leave his home without being arrested.

“In no way is this a joke,” Ethier—who has 5.4 million subscribers on his own YouTube channel—said on his monetized video.

Ethier went on to explain how he began dating Alexia and extolled her virtues as a hard worker and a leader. “I felt the happiest I’ve ever felt,” Ethier said as he began to cry on video (the same way he cried when he described Alexia’s death in previous videos). He said he has a criminal record from when he was younger and that he dropped out of high school in ninth grade. He said he joined the Army but that he wanted to be an artist for his entire life.

Ethier said he was trying to help Alexia succeed in her life, and their YouTube channel Dream Team made $50,000 for the 13 videos they produced together. He also apologized to Alexia’s family for the stress he put them through over the week and said, “I expected all of this to stay on YouTube. And it didn’t.”

Ethier explained how he thought of the idea of faking her death. First, they were going to say she died. Then, they would create a video in which he would use a Ouija board to contact her. Ethier would then attempt to call her at 3am for another one of his paranormal vlogs. Lastly, they would resurrect her. It was all for the purposes of attracting more subscribers to their YouTube channels.

“She was down to make these videos with me,” said Ethier, who didn’t respond to multiple Daily Dot requests for comment. “She was nervous, but I told her it didn’t matter. These people are going to talk but they’re going to talk regardless. She was OK and agreed to do it.”

But after the initial video was released, Ethier said her parents were upset and that her father wanted them to admit that it had been a prank or that he was “going to the news and tell everybody the truth.”

“I didn’t know that if I didn’t delete those videos that she would break up with me,” said Ethier, who eventually got rid of their videos from the past week.

Now, he said he has police charges to deal with, though it’s unclear if that’s true.

“I never hit a woman in my life,” he said. “How could my girlfriend go and does this to me? How did I deserve this? … Now my entire life is ruined.”