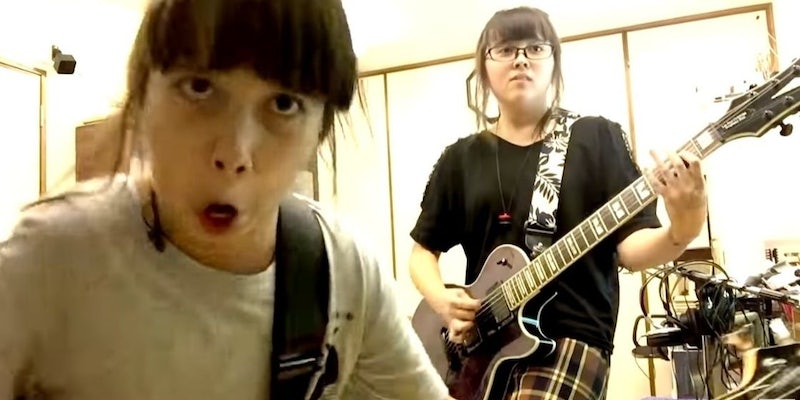 You should hear their take on the Beastie Boys' 'Sabotage.'

If you’re a heavy metal fan, you’ll watch pretty much anybody try to cover the classics. That kind of acceptance allows a 10-year-old girl to blast through Led Zeppelin and Rage Against the Machine on the drums. It’s why this trio of Mexican sisters went viral for their sacrifices to the metal gods. Even Metallica appreciates a good cover, especially if it occurs in the butcher section of a grocery store.

Now, a pair of sisters from Japan are taking their turn in the spotlight, partnering with the video game Rocksmith and uploading dozens of videos to their YouTube channel to show off their rock chops and their versatility in covering everybody from Iron Maiden to Tenacious D, from Deep Purple to Skid Row.

The duo, Audrey and Kate, hit it big last September with this cover of Slayer’s “Raining Blood,” where more than 1.2 million people have viewed the video.

That level of rocking out has compelled more than 157,000 people to subscribe to the audrey123talks channel, where the duo has accumulated more than 23 million views. And they’re prolific. In the last nine days, Audrey and Kate have uploaded 28 videos. Including this cover of “Sabotage” by the Beastie Boys, where they made their own DIY version (including fake mustaches) of the iconic music video.

And Primus’ “Tommy the Cat” in which Kate replicates Les Claypool’s stunning bass guitar work while she swings her feet (which don’t quite reach the ground) under her chair.

Or the iconic 1980s metal anthem, “The Final Countdown” by Europe, in which Audrey shreds John Norum’s guitar solo as if she’d been playing with the Swedish group since 1984.

All of which goes to show that no matter how old you are or where you live, the power of metal can inspire you to rock out for hours and hours on YouTube.