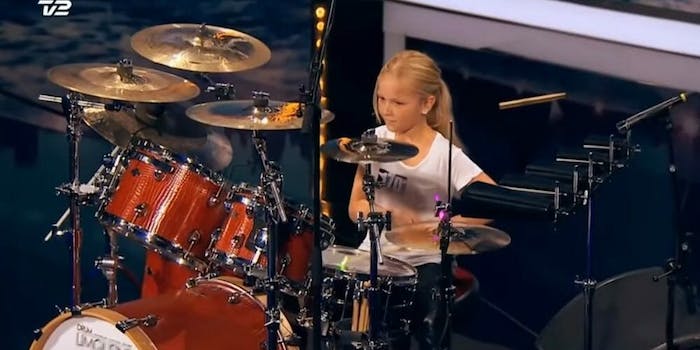 Screengrab via Got Talent Global

This 10-year-old girl slays Led Zeppelin, Rage Against the Machine on drums

Though she’s only 10 years old, Johanne Astrid Poulsen apparently appreciates the chance to rock out every once in a while. The fact she can play the drums like an adolescent combination of John Bonham and Brad Wilk makes her one of the grooviest preteens we’ve ever seen.

And the fact she can dominate Led Zeppelin’s “Whole Lotta Love” and Rage Against the Machine’s “Killing In the Name Of” on the drums makes her one of the greatest musical talents in all of Denmark.

Quite literally, actually. Because on this performance, she won the 2017 Denmark’s Got Talent competition with her skills on the skins.

Not to mention her showmanship. Look at the casual toss of her drumsticks at the 0:27 mark in order to procure the drumsticks with the light-up tips.

Aside from a 10-year-old drumming to a song that touts the attitude of “Fuck you, I won’t do what you tell me,” and another tune in which Robert Plants spends the entire time talking about wanting to bang anything that moves, this is awesome stuff.