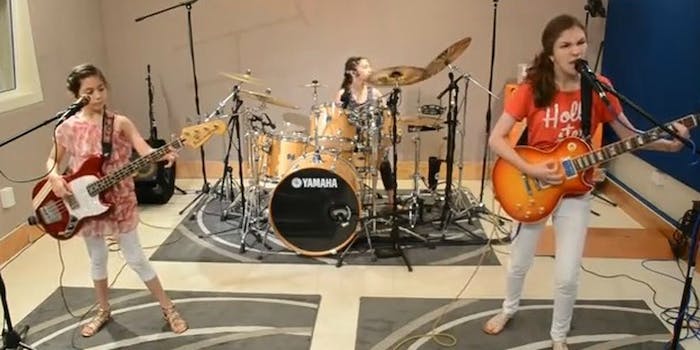 If you like your heavy metal played by adorable children, we've got just the video for you.

If you like watching preteens playing heavy metal, you might already know about Unlock the Truth. But if you want to watch preteen girls rock out to Metallica, well, we’ve got just the video for you.

Witness three Monterrey, Mexico-based girls (aged 14, 12, and 9)—who call themselves The Warning—cover the hell out of “Enter Sandman.”

Pretty good, right? While singer Daniela’s voice doesn’t have the grittiness of James Hetfield (nor does she have the cool microphone he uses), she kicks out a fairly faithful Kirk Hammett impression on the guitar solo. And make sure you pay attention to the “Now I lay me down to sleep” prayer at 3:26, because 12-year-old Paulina on drums and 9-year-old Alejandra on bass perform it rather impressively.

Check out the band’s official website where you can help fund a trip for the sisters to attend a summer program at the Berklee College of Music in Boston. And if you’re interested in more covers from The Warning, click on the band’s YouTube page, where it’s posted videos of the trio playing Twisted Sister’s “We’re Not Gonna Take It” (which I think might actually be better than the Metallica cover), AC/DC’s “Back in Black,” and Katy Perry’s “Roar.”

All in all, we’re just thankful there’s no cover of “MMMBop” anywhere to be found.