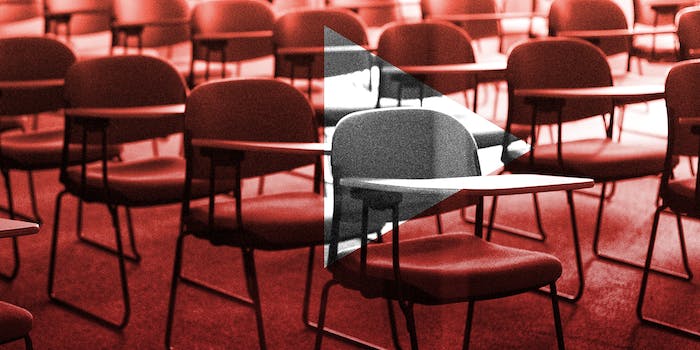 Education on YouTube isn’t as easy as A, B, C

Getting into the classroom was only the beginning.

Getting into the classroom was only the beginning.

With the YouTube education revolution in full-swing, the learning doesn’t stop for students at the end of a school day when they get out of class. They can head right back to their computers to watch videos, learn new skills and facts, and manage to have fun in the effort.

Traditional education and online videos clashed at first; many schools barred students from going on YouTube, which then caused problems for the teachers who wanted to use the videos to supplement their lesson plans. But now, more schools have opened up to the idea, although some pose the question of whether these online educators are trying to compete with the traditional system.

But just because these two forms of learning each have their own pros and cons doesn’t mean they face different problems: On the whole, they’re both battling some of the same issues.

When more educators started popping up on YouTube, the platform tried to give them one convenient location; it launched YouTube EDU, which grouped many of the education videos together and gave users a centralized destination, free for anyone to learn from and use, where more high-quality videos were uploaded every day.

But now it’s 2014, and not only are people flocking to YouTube, but it’s also becoming an integral part of many classrooms around the world. According to Vidstatsx, the top 12 most subscribed education channels all have over a million subscribers each, and that’s not even counting some of the big names like AsapSCIENCE and VSauce.

If you weren’t convinced, just take a look at VidCon. With more than 18,000 people in attendance, the two separate education panels had completely packed houses—and not just by people there just to claim a seat for a later panel. The panelists were treated like rockstars.

The Education + Entertainment panel, which included an all-star list of YouTube educators like John Green, PBS Idea Channel’s Mike Rugnetta, AsapSCIENCE, and The Brain Scoop host Emily Graslie, filled up one of the bigger rooms at the Anaheim Convention Center. Not only were fans of the panelists in attendance, but many members of crowd were also educators themselves—both online and traditional.

Education has quickly become one of the fastest-growing areas of YouTube, with pet videos (the usual suspect when it comes to citing the site’s sillier side) getting just half the views that education videos do.

But it’s not always a cakewalk. They have to come up with engaging topics an audience will want to watch, shoot the videos, edit, post, and promote their content, and for those channels who are able to make a living solely off of their videos, have enough people watch them. Even then, they still may run into problems.

“We’re overwhelmingly and widely accepted, but there are still people who somehow think that we’re in direct competition with traditional educators or teachers or that we’re trying to replace what happens in the classroom, and that’s not at all what we’re trying to do,” Graslie told the Daily Dot.

Graslie, now the Chief Curiosity Correspondent at the Field Museum in Chicago, got her start in YouTube after she appeared in one of Hank Green’s Vlogbrothers videos and he gave her a channel.

Gregory Brown, a former science teacher and one half of AsapSCIENCE, spoke of a similar struggle. He started the channel with Mitchell Moffit more than two years ago, but recently chose to focus on AsapSCIENCE full-time. Having been on both sides of the fence, he explained at VidCon that the two entities had quite a few similarities.

“I think teachers have a similar struggle in that we both have to teach information that may seem uninteresting and spin it into a compelling narrative,” Brown said.

Both traditional educators and the educators on YouTube want to teach people something new without losing their audience. However, unlike regular schools, there is no final test at the end of the year on YouTube, no curriculum, and no need to think about the Common Core, the rigorous educational standards that give parents like Louis C.K. a headache along with his kids.

Even then, YouTube creators are limited to what they can cover. They can only do so much, while the sheer number of topics they can make videos about is infinite.

Some channels, like Green’s Crash Course, are more curriculum-friendly, as many of the history courses and videos cover topics that’ll likely end up on standardized tests or a final exam, and as he said at VidCon, “Crash Course has definitely made its way into lots of classrooms.”

But by no means are any of the educators trying to replace anything already set in the real world.

“I don’t see Crash Course as any sort of replacement to classroom education or teaching,” Green said. “It’s a way into a topic and an introduction and a little bit of nuance; enough nuance to get excited and hopefully enough to make it interesting. But the real work, in my mind, still has to happen in a classroom.”

And that’s not the only pushback they face.

Sarah Urist Green hosts The Art Assignment, a collaboration with PBS Digital Studios that aims to “de-mystify art for the internet audience,” but before she made her YouTube debut in February, she was a museum curator.

While she, like many of her fellow educators, are able to make the information more accessible, not as many professionals in her area are making videos—or watching them. One of the more recent additions to YouTube’s education ranks, she made her channel because while there were plenty of art videos out there online, there was a lack of videos discussing contemporary art.

Her videos may be more open to interpretation than a science video, but she feels just as much pressure to get her facts straight.

“I certainly want my art historian peers to like it, and so I don’t want to get my facts wrong,” she said during the Making People Smarter Through Online Video panel. “But I haven’t been called out on anything yet, so I’m kind of proud of that.”

Although they aren’t held to educational standards when it comes to accuracy, these educators want to put out the right information to their audience. A painstaking amount of research can go into making any one video, and if you make a mistake, the Internet is sure to let you know. When you’re trying to clear something up like an educational myth, accuracy is especially crucial.

With high-quality information paired with an energetic and enthusiastic host invested in a topic, you can teach just about anything, according to Graslie.

“Being able to identify with students is probably one of the strongest teaching tools that one can have,” Moffit told me. “Whether that’s on a personal level and getting along with them or whether it’s like, ‘How can I relate to this person? Whether it’s through a video game or a YouTube video, what does this kid experience in their own way, and how can I make it a learning opportunity’?”

Sciences versus the humanities. It’s an educational battle as old as time. Except, when it comes to the many educators on YouTube, it’s really not.

“There is no battle!” Michael Stevens, better known online as VSauce, said at VidCon. “It’s all just one big group hug!”

But for students, it’s the basis of another eternal argument: Which one has the worse workload? And at what point are you no longer expected to know the side that you don’t deal with on a daily basis?

The answer to that isn’t as easy as opening a YouTube video.

“I think that the easy and maybe disappointing answer is that it’s institutional,” Rugnetta noted. “I ended up going to a college where there were no required classes and there were no tests or grades. And that had a big impact on me, being able to see those. But every other college I applied to I was like, ‘I want to study music, and math, and theater.’ And they were like, ‘No, no, you have to pick one.’”

That mentality is slowly breaking down, although it may take many years before that idea expands to academia and your average viewer. Graslie is well-known as a scientist on YouTube, yet she never took college biology. And one of the main missions of AsapSCIENCE is to connect with the people who “doesn’t necessarily think or know they like science.”

“We try to find an angle that’s interesting or relatable that people can try to see in their own lives and then apply to science, even if they weren’t interested in learning science in the first place,” Moffit said.

While the two education panels at VidCon were well-received by those who attended them, there were a few glaring omissions: One of the panels had two women, Sarah Urist Green and ViHart. The other only had Graslie. All of the panelists were white.

And the lack of diversity on the panels was brought front and center by the very people who were on them.

The struggles of women on YouTube are certainly not new, and it’s a huge problem to this day, even in the realm of education. Graslie, in particular, made a video to show her audience the types of sexist comments she received on her videos from viewers.

It’s something that may prevent women from starting their own channels or may see them giving up more easily, and she stressed at the time that content creators need to take care of fellow content creators.

That mentality is starting to bring a little more diversity to YouTube education—although not as much as they would like.

“I think we have an obligation to develop talent so that in five years this panel is not as white and upper-middle class talent,” John Green said. “I don’t think it will happen by just waiting. I think we have several millennia of history to indicate that it won’t happen just by waiting. We have to find them and we have to help them.”

The push toward a visible platform full of diversity and in YouTube has started, albeit slowly. For example, Henry Reich, the man behind MinutePhysics, recruited Ever Salazar, who lives in in an unstable Venezuela, to make the supplemental show, MinuteEarth. The show is delivered via DropBox, and upon introducing him to the crowd, Salazar received a deafening applause.

It’s a push even the already-established educators need to make. Moffit and Brown have made videos online for two years, and although the two have long been open about their relationship with each other, they recently came out again to their viewers in order to talk about a need for queer role models online. The feedback has been largely positive from viewers.

It hasn’t completely changed the face of YouTube education, but it’s progress. And with more of it being incorporated into the classroom, it may inspire more students to start becoming the teachers.

“The only difference from where we are and you are is that you haven’t done it yet,” Smarter Every Day’s Destin Sandlin said.

Photo via Alan Levine/Flickr (CC BY 2.0) | Remix by Jason Reed