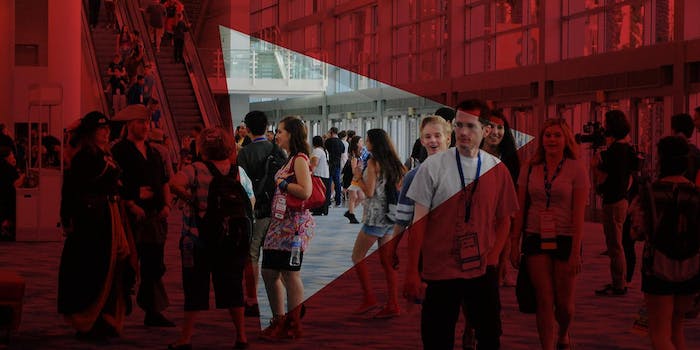 Everything you need to know about VidCon 2014

This was the year VidCon, along with the industry surrounding it, grew up.

Everywhere you looked at VidCon, there were lines.

In the official capacity, the formal lines were to be expected, but you couldn’t walk far in any direction without encountering a spontaneous line as well, swarmed around YouTube stars holding impromptu meetups or just under siege on their way to lunch. At every moment attendees were waiting for something, a way to document their participation in the largest VidCon ever.

This was the year VidCon, along with the industry surrounding it, grew up. With 18,000 attendees, VidCon has grown in five short years from a niche conference for a newborn community to a juggernaut on the edge of the mainstream. The Tonight Show handed out balloons and encouraged attendees to lip sync to pop tracks, Michelle Phan hawked her L’Oreal makeup line, and a peanut butter brand handed out samples next to a sign encouraging fans to “collab” with them.

From an outsider’s perspective, VidCon appears to be the largest gathering online video enthusiasts in the world, but inside, it’s also a tale of two difference conferences under one umbrella that don’t quite understand each other yet.

Thursday opened the Industry portion of the festivities, with about a thousand professionals and professional hopefuls ensconced on the top two floors of the convention center hearing keynote presentations and small panels. The vibe was not unlike the annual South By Southwest Interactive Conference in Austin, where bigwigs spout off metrics and success stories while hopefuls pitch their mobile apps and startup ideas. Industry panels talked of leveraging intellectual property from large corporations that have bought into YouTube channels like Disney’s purchase of Maker Studios and of teaching old school brands about the lucrative eyeballs on online video. YouTube sponsored a Brand Partner lounge where big advertising teams were schooled in the online experience by actual YouTubers sitting under giant photos of their own faces. VidCon became the place for YouTube to unleash a bevy of technical solutions for its users, including the fan subtitles and translations, a virtual tip jar for creators, and new mobile creator apps for on-the-go management.

While Jeffrey Katzenberg outlined DreamWorks’ approach to video in a fireside chat, the noise of the crowd two floors below rushed through the walls like a windstorm, so loud the audience couldn’t ignore it. While the likes of John Green and Grace Helbig were telling a room full of professionals about the importance of community, that community was busy roaring to life downstairs as their favorites began autograph signings and impromptu interviews and Q&As. But what seemed like a roar on Thursday paled in comparison to the Community programming kickoff on Friday. Almost every room was surrounded by a snaking line, leaving many attendees disappointed as popular panels filled up quickly.

Trying to get into a packed panel on building an online audience @VidCon. It’s “Too full” at present.

the Education on YouTube panel is full. tempted to crawl through the air vents and watch it from above #VidCon

Likewise, the demand of signing and photo sessions far outstripped the resources of the convention, and daily emails were sent to attendees outlining new rules that had fans lining up as early as 6am—three and a half hours before the convention officially opened—to gain admittance to the morning sessions.

How are two signing lines closed when you are not supposed to line up before 12 and nobody knows what is going on? #vidcon @VidCon

Kind of feel bad for the creators with 9:30 panels who had tiny audiences because of the long lines #vidcon

VIDCON IS CUTTING OFF LINES AT 200 LIKE PLAYLIST IM PISSED

While the Industry folks continued to discuss channel formats and subscriber counts, the Community panels split into two camps that put the focus on personality over metrics. Programming on community building and challenges facing content creators included a panel on women’s issues moderated by Laci Green, Hannah Hart talking about the need for transgender community to have their own panel in addition to the LGBTQ+ discussion, and a panel on diversity that was so full that interested attendees were turned away.

Other programming erred on the side of pure fangirling. For example, it was a solid bet if any member of Our 2nd Life appeared on a panel, the room would edge to capacity, the age of the attendees would skew younger, the questions would veer off topic, and spontaneous bursts of “I love yous” and extended applause threatened to eat up precious panel time. Some aspects of VidCon are designed to facilitate these sorts of voyeuristic and low-level participatory engagements, like the Q&As or mainstage shows, but often that zeal spread to panels that purported to be about practical advice for wannabe YouTubers. The result was a VidCon that felt decidedly mainstream, far from its subculture roots of the mid-aughts. The YouTube crowd is young, but VidCon proved it skews even younger than the industry might predict. Iconic community members like Wheezy Waiter or even Mamrie Hart preside like elder statesmen over a crop of younger and younger stars, including the influx of high school aged Vine stars like Nash Grier.

One point of convergence for the industry and community tracks was the influence of and potential for transition to the mainstream media world. Industry veterans spoke of cultivating channels in the television model, with varied programming curated onto one account. Most of the younger generation of YouTube expressed interest in more mainstream success, from Troye Sivan’s announcement that he’ll release an album in August to stars like Hannah Hart participating in the Comedy Central quiz show @Midnight. They all seemed confident that YouTube would still play a role in their success, even if they expanded their reach through more traditional means. Still, at a Saturday panel on making the transition from YouTube to TV, several panelists were blunt about the benefits that TV can offer them that YouTube, for all its community-building, can’t—including being taken more seriously by the industry.

The real question is whether such transitions can happen successfully, and how YouTube will play a role in the continued fame of its stars. The differentiating factor is engagement, something Burnie Burns, the founder of Rooster Teeth, hit on during his keynote. “If you look at just subs or views, you’re not looking at the full story,” he said, explaining the power of 30 fans creating cosplay of one of the company’s shows during the first season of the series.

“On a spreadsheet that would look like 30 DVDs sold. But it’s so much more.”

To underline the point, he showed the company’s latest effort to raise capital for a feature film, which surpassed its goal in its first weekend and has raised over $1.8 million with a week to go. Burns pointed to another statistic, though, more important to their success: Just over 26,000 fans have contributed to that campaign. “If we uploaded a video and only 25,000 people watched, we’d think something was technically wrong,” emphasized Burns, whose videos average half a million views a piece. That number, however, was more than enough to fund new content in a symbiotic relationship founded on community and engagement.

Whether Burns’s message was heard remains to be seen, but at least over the weekend at VidCon, the industry seemed very removed from the culture of the community that’s building these stars. Downstairs, metrics were almost completely ignored in favor of a real-life glimpse of a favorite star—or better yet, a selfie, a chance to deliver a handmade shirt, or an appearance in the background of an upcoming video.

The biggest and most evident missing chunk of the con was the space for creating. More often than not, the con told instead of showed. Panel after panel touted that YouTube’s barrier to entry is low and that anyone should YouTube, but there wasn’t much room for learning or engaging with the creative process.

Is VidCon meant to be a celebration of its establishment of stars or a breeding ground for the next generation of talent in the space? One can only hope that the next generation of stars isn’t being drowned out by the culture of celebrity already overwhelming the space—and that the fans who run in packs at the mere sight of a known YouTuber haven’t trampled the up-and-comer who’s walking arm outstretched, capturing their own video content for a future channel.