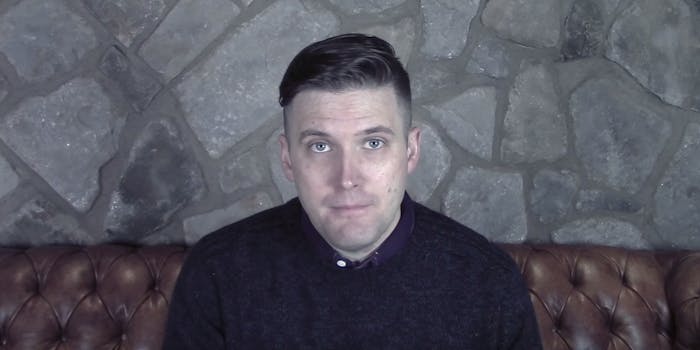 A deep dive into the alt-right’s greatest YouTube hits

The perfect, unfiltered crash pad for the alt-right's leading pundits.

When Hillary Clinton pointed out the connection between Donald Trump and the alt-right, she wasn’t talking about an ordinary political movement.

As the Daily Dot’s Amrita Khalid notes, the alt-right is a “younger, ballsier rejection of the GOP establishment and political correctness as a whole—think the Tea Party meets Pepe the Frog.” But it’s also perennially attacked as a hub for white nationalism. “For the alt-right, ‘Make America White Again’ is not an ironic dismissal of Trump’s campaign slogan,” she concludes.

In order to better understand this movement, I spent a night diving into the world of YouTube videos that either outright support or are in notable ways sympathetic to alt-right causes. While there, I learned about the distinctive style that allows them to flourish online.

We can start with Richard Spencer, the prominent white nationalist who coined the term “alt-right.” In a December 2015 video about his reasons for doing this, Spencer traced the lineage of mainstream conservatism from the Barry Goldwater campaign to the presidency of George W. Bush. The alt-right, he argued, exists outside of that continuum. They’re comprised of “people who have liberated themselves from the left-right dialectic” and “grasp the utter uselessness of mainstream conservatives, particularly in this hyper-racialized world in which we live.” They admire Donald Trump because “he has attacked and humiliated a lot of the same things that I used to hate and still hate.”

This mainly means establishment conservatives, whom Spencer tellingly dismisses with the epithet “cuckservative.” (This is a porn-sourced term for conservatives who are allowing themselves to be metaphorically cuckolded for not being conservative enough.) Most importantly, Spencer closes by insisting that the left has become the establishment and that the alt-right is, in fact, the truly rebellious movement at this time.

Then there is Paul Joseph Watson, whose popular YouTube channel is perhaps best known for disseminating debunked conspiracy theories about Hillary Clinton’s health. That said, Watson’s videos also cover a broad range of topics embraced by the alt-right, denouncing Islam, Black Lives Matter, transgendered rights activists, and feminists with gleefully inflammatory language. Like Spencer, Watson attempts to legitimize the alt-right’s brand of conservatism by arguing that it is in fact the “new counter-culture.” While Spencer attempts to give off a scholarly air, however, Watson strives to persuade through sheer entertainment value.

His videos flaunt their lack of political correctness with humor and their host’s defiant tone, both intended to make them more convincing to viewers who mistake shock value for truth-telling. This is best exemplified in “I Love My White Male Privilege,” during which Watson sarcastically contrasts the notion of “white male privilege” with a series of “facts” on subjects ranging from the slave trade and colonialism to Islam, rape culture, and men’s rights issues. It’s hard to look away during this screed, whatever else you may say about it.

Finally we have Carl Benjamin (aka Sargon of Akkad), a YouTuber who rose to prominence during Gamergate, an antifeminist backlash among a segment of video game fans. Although he doesn’t consider himself part of the alt-right, Benjamin’s videos also focus on attacking favorite alt-right targets like (again) feminism, Islam, Black Lives Matter, and the overall notion of straight white male privilege.

All of this is done in the deliberately provocative, anti-PC tone that is generally characteristic of alt-right rhetoric. Because Benjamin has talked with many of the alt-rightists who constitute his fan base, his video “An Honest Look at the Alt Right” is particularly illuminating. Although he criticizes the alt-right for collectivist and authoritarian thinking, he argues that they’re reacting to a comparable amount of racism from the left.

“By framing the argument as the progressive left advocating for minorities against whites, they [the social justice left] have set the stage for a group to become the antagonist for this position—which is precisely what the alt-right is,” Benjamin argues, later adding that “the progressive left have used liberal guilt to advance an agenda that is focused largely around racism and advocacy against whites.”

This brings us to the two reasons why there is an audience for pundits who identify with or are sympathetic to the alt-right.

The first, of course, is the straightforward political explanation. As heterosexual white men lose the privileged position from which they’ve benefited for most of Western history, far-right movements inevitably pop up to feed off of their grievances. Similarly, because we’ve become more sensitive to the concerns of women and minorities, it is less culturally acceptable to express views that marginalize these groups. That’s why the alt-right pundits think of themselves as representing a culture that fights against the liberal status quo. From the point of view of those invested in maintaining certain privileges, a cultural consensus which strives toward diversity is a hostile status quo.

While it remains to be seen whether the alt-right will help elect Trump, I suspect the provocateurs themselves will always have an audience online. So long as there are people who embrace the Internet’s potential for uninhibited self-expression, we will have performers who entertain us by transgressing against our most sacred political taboos. It’s always an interesting show, regardless of whether you agree with its message—and that’s the key to its persistence.

It’s why Spencer, Watson, and Benjamin never tiptoe around the fact that they’re slaying sacred cows. They revel in what they’re doing because they know that’s what their fans want to see. Sometimes the provocateurs of the world happen to be right, and sometimes they’re dead wrong, but either way they’re a perfect match for YouTube.