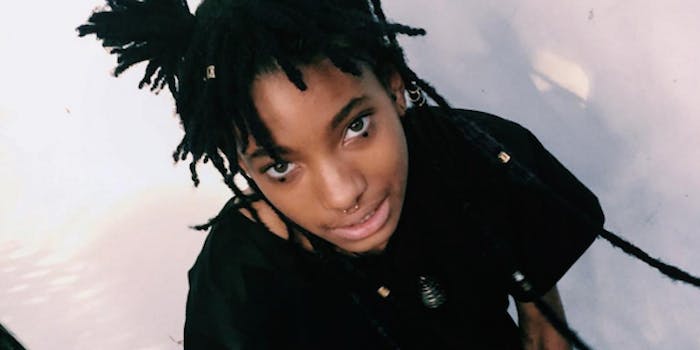 Willow Smith surprise-released her debut album, ARDIPITHECUS, on Spotify Friday. Just like the artist herself, the songs are full of equal parts deeper-than-her-years insights and Tumblrcore imagery.

Smith self-produced the 15 tracks, collaborating with her older half-brother Trey (credited as AcE) and her friend Jabs on some of them. They’re exactly what I imagine it’d feel like to be 15 in 2015.

Right out of the gate, the first track “Organization & Classification” hits you with feminism and sex-positivity. She delivers lyrics like, “I’m just a teenager/but I feel angrier than a swarm of hornets/They call us whores/but it’s just because we do just what we want and don’t look back once,” over a Bjork-recalling electronic beat.

Then later in the album, without batting an eye, she dedicates two pensive tracks to the half-demon, half-human, bass-playing Adventure Time character Marceline.

That’s what being a teen is, isn’t it? Feeling the heaviest feelings you’ve felt in your life while simultaneously elbowing out a space for yourself in a culture you think you can see more clearly than everybody else. But Smith’s “No one gets it! I’m painting my nails black!” is, “I’m writing two songs about my favorite TV show!”

It’s a huge departure from her first foray into the music world with “Whip My Hair,” and I mean that in the best way. She’s still making music with a pop influence, but she has perspective. The album reads like a zine—pathologically sincere.

When someone else from her generation of pop musicians, let’s say Justin Bieber, sings a lyric like “What about the children?” you laugh. There’s no way that guy is lying awake at night worried about the world’s young people. In fact, a PR team probably requested that song be included on the album.

That’s not the case with Willow. When she sings something like, “So tell me one thing: Is it really bad to have experience that you know for yourself/rather than sit home and believe in this?” you can picture the diary page where she wrote that down. The late-night iMessage she sent to Jaden.

It’s that ability to let highbrow and lowbrow, the mainstream and the deeply personal, sit side by side and treat them with equal respect that makes the album rule. “Wait a Minute!” is basically a disco song, but it has lyrics like, “I left my consciousness in a sixth dimension.”