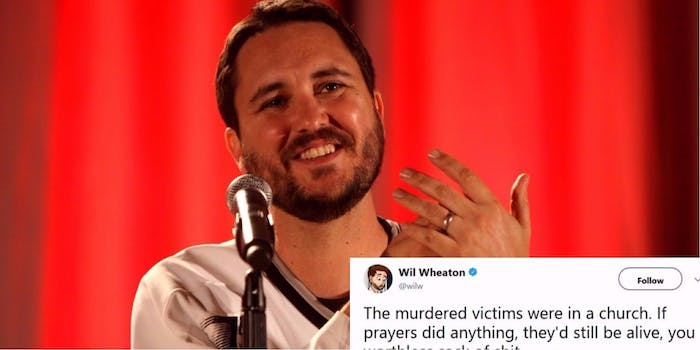 He called Paul Ryan a 'worthless sack of s**t.'

After a gunman at a Texas church killed 26 people on Sunday, making it the deadliest mass shooting in the state, politicians, as they usually do, took to Twitter to offer condolences through thoughts and prayers.

After the #SutherlandSprings shooting the families & community turned to God for grace & healing. Their faith strengthened them. #txlege https://t.co/mOPA6rQ7ee

Keeping all harmed in Sutherland Springs in our prayers and grateful for our brave first responders on the scene.

We pray for the Sutherland Springs community in this difficult time. So incredibly thankful to first responders. #SutherlandSpringsTexas

Reports out of Texas are devastating. The people of Sutherland Springs need our prayers right now.

Wil Wheaton, the Star Trek: The Next Generation actor and a prolific writer, has had enough. On Sunday, soon after reports of the shooting began surfacing, Wheaton attacked Speaker of the House Paul Ryan.

The murdered victims were in a church. If prayers did anything, they'd still be alive, you worthless sack of shit. https://t.co/iGHxPrYrLN

Almost immediately, Wheaton made one point clear. He wasn’t trying to blast people of faith.

Hey, real and actual people of faith: I hear you. I apologise for insulting you, in my rage at Paul Ryan's refusal to address gun violence.

Because I want to be sure sincere people of Faith see this: I spoke in anger, and I apologize to you.
https://t.co/O4JW2yA531

As much as I love you, some people can only offer prayers. Don’t hate them. pic.twitter.com/gUBR900muR

I get that. But don’t discourage the ones who only have that to give.

That’s not how prayers work @wilw. I suggest you check that attitude. We’re all frustrated. Religious intolerance won’t solve this.

You mean you want him to take meaningful action that you support. As if gun laws stop evil from carrying out horrible crimes. They won't.

This makes me feel embarrassed to be an atheist. Do better, Mr. Wheaton.

Plenty of people, though, are frustrated with Congress’ lack of ability (or lack of desire) to do anything to address the continued mass shootings that occur in the U.S. That includes Sen. Chris Murphy (D-Conn.). But Wheaton, even with the criticism, had an important question to ask: Will anything change?

Your faith is your business, and people like Paul Ryan exploit it while they hide behind words without deeds, and people continue to die.