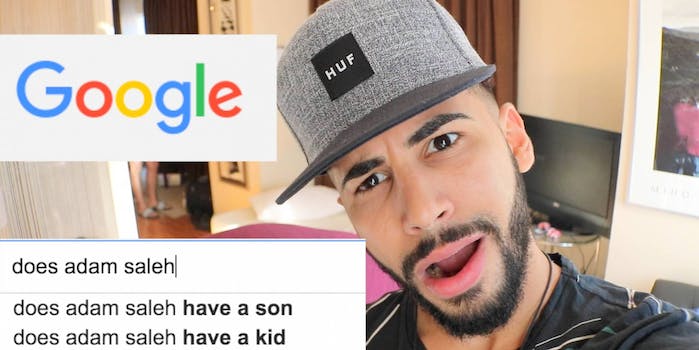 The self-declared 'professional idiot' always has something in the works.

Adam Saleh is a YouTube prankster, hoax master, and licensed jester. The internet personality has gained recognition due to his infamous and numerous vlog pranks and hoaxes this month, and he’s at it again.

The 23-year-old Brooklyn, New York, native claimed on Wednesday that he and a friend were kicked off a Delta flight because he spoke Arabic on a phone call to his mother. The first video shows Saleh scolding and yelling at both staff and passengers, enraged at the fact that he is allegedly told to leave the plane. He says, “There are six white people against us bearded men,” and that he is uncomfortable as the camera pans around the plane. “You guys are racist,” he states as he is escorted off the scene.

Despite the realistic, distressing videos, the internet is skeptical of the clips. Twitter users are commenting on the tweet with links and photos to his prankster tendencies, as the vlogger is notorious for his hoaxing past. Former CNN host Soledad O’Brien noted that a friend on Saleh’s flight was helping clear the air and provide the inside scoop.

Don't let this guy fool you. He's twisting the truth for attention. Maybe he forget his other "pranks" on planes @omgAdamSaleh @Delta pic.twitter.com/F38Qk7Z9EK

Soooo. I have a good friend on this flight right now. Getting additional details on how this went down. Standby https://t.co/ibOv6rguYU

A LOT still unclear. But apparently woman sitting near my friend tipped off flight attendants he was a youtube star known for pranks.

Delta has since released a statement regarding the incident, stating the removal of the men transpired due to “more than 20 customers expressing their discomfort.”

To be sure, he’s a frequent offender when it comes to staged YouTube videos.

The origins of Saleh’s reputation can be rooted to his 2014 video, “Racial Profiling Experiment.” It shows Saleh and his friend, Sheikh Akbar, fighting in front NYPD cops in two different scenarios, supposedly bringing light to Islamophobia and police brutality: The first round of punches came with Saleh and Akbar dressed in jeans and T-shirts, revealing a stand-still officer and no interference. In the second round, the men are in traditional Islamic dress and keffiyeh scarves, once again argue in front of a cop, and then are instantly approached. A stop-and-frisk is captured on camera preceding the cop’s question,”Why are you dressed like this?” The video circulated the internet quickly, landing 1.9 million views to date. Saleh later confirmed, however, that the video was a farce through an online half-apology.

Just last week, Saleh tested the limits once again with a new upload, featuring him apparently smuggling himself via baggage claim in a suitcase on a flight from Sydney to Melbourne, Australia. He claims his attempt was successful, but a person would probably freeze to death at airline altitudes and not sweat profusely like he did in the video.

The airline itself proceeded to call him out via Twitter.

Nice try Adam, but definitely a few inconsistencies with this vid, namely the fact we have footage of you boarding the plane!

The YouTuber has garnered over 3.8 million subscribers, with over 1.6 million subscribed to TrueStoryASA channel and more than 2.2 million to his Adam Saleh Vlogs channel. His other videos include a “Pulling Hijab Off” experiment and a “Counting down in Arabic on a plane” experiment, revealing that most of his work circles around revealing unfair treatment toward Arabs and/or Muslims. It seems that his intentions are focused on provoking over-the-top reactions among the people around him to prove a point. Too bad most of them are fake.