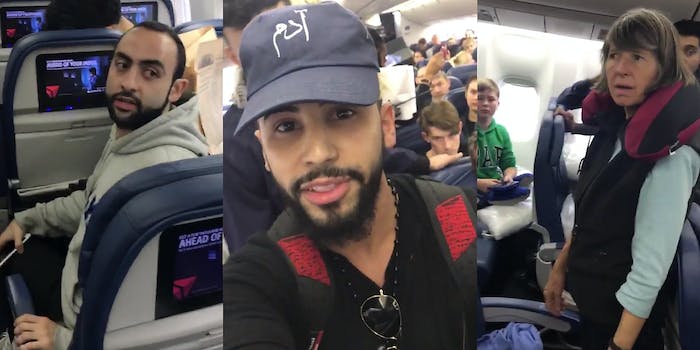 He claims he and his friend were removed because the language made other passengers uncomfortable.

YouTube personality Adam Saleh says he and his friend were kicked off of a Delta flight to New York after speaking Arabic on the plane.

In a video recorded on the plane, Saleh says he was speaking Arabic and at one point turns around to a group of passengers waving and saying “goodbye” to him. “You guys are racist,” he says.

The Daily Dot has reached out to Saleh about the incident, but so far has not received a response.

All the videos Saleh posted were either as Saleh is being walked out of the plane or after he is off, but he claims that a group of passengers said they were uncomfortable at his speaking Arabic to his mother on the phone and threatened to leave if Saleh and his group were not removed. “It’s six white people against us bearded men,” Saleh says in one video.

Saleh, a Brooklyn native who has a history of pulling pranks on planes—including fake ones—also claims that Delta said he and his group were being “loud” as the reason for their removal, though they allegedly didn’t warn him and his friend before removing them from the plane and were rude as soon as the cameras were turned off.

UPDATE: Delta just brought the police to speak to us.

In a statement, Delta spokesperson Morgan Durrant told the Daily Dot that Saleh and his friend were removed after “more than 20” other passengers complained.

“Two customers were removed from this flight and later rebooked after a disturbance in the cabin resulted in more than 20 customers expressing their discomfort,” Durrant said. “We’re conducting a full review to understand what transpired. We are taking allegations of discrimination very seriously; our culture requires treating others with respect.”

Many are taking that response, which was sent to other journalists, to mean Delta favored prejudiced passengers over the victims.

In other words, because 20 racists on the plane outnumbered their 2 victims, you threw the victims off and not the racists

Delta has previously been accused of racism in their methods of removing people from flights. In one video, police officers dragged a black woman from a flight after she walked onto the plane without checking in with the gate agent. In October, a Delta employee refused to believe a black woman was a physician and blocked her from helping a sick passenger. A woman was also kicked off a United flight for wearing a Black Panther hat.

Update 9pm CT, Dec. 21: Delta spokesman Durrant says Saleh was “shouting” and causing a commotion on the plane, contradicting his assertion that he was kicked off the flight for “speaking Arabic.” Durrant also points out that Saleh is a known prankster.

“Upon landing the crew was debriefed and multiple passenger statements collected. Based on the information collected to date, it appears the customers who were removed sought to disrupt the cabin with provocative behavior, including shouting,” Durrant said. “This type of conduct is not welcome on any Delta flight. While one, according to media reports, is a known prankster who was video recorded and encouraged by his traveling companion, what is paramount to Delta is the safety and comfort of our passengers and employees. It is clear these individuals sought to violate that priority.”