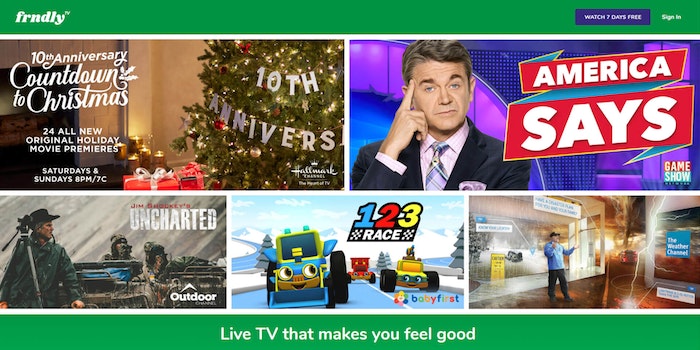 The new streaming service bundles several of your favorite cable channels into one wholesome, familiar package.

Another streamer has entered the fray, and this one is friendly. Actually, it’s Frndly, to be precise.

Frndly TV is a family-friendly live and on-demand streaming service that officially launched on Oct. 1. The streamer will combine some of the most familiar family-friendly basic cable options into one service in hopes of convincing parents to subscribe.

Here’s everything you need to know about Frndly TV.

What is Frndly TV?

Frndly TV Ceo Bassil El-Khatib lays out the company’s mission clearly: “While more live streaming services have become available over the last few years, none of them focus on the American family the way Frndly TV does. We’ve heard many times from consumers that they wanted a more affordable TV service with the channels they can actually watch together as a family.”

At launch, Frndly TV offers more than 1,000 on-demand titles and content from 12 different channels, with an eye toward expanding to 20 channels over the next year.

These 12 launch channels are:

Content from these channels is available to live stream and on-demand.

How much does Frndly TV cost?

What devices can I watch Frndly TV on?

Viewers can access Frndly TV includes Roku, Roku TV, Amazon Fire TV, Fire TV Stick, Chromecast, iOS or Android apps, and most major web browsers. All you need to watch Frndly TV is one of these internet-connected devices and a Frndly TV account.

How does Frndly TV work?

Frndly TV is kind of a hybrid between library-based streaming services like Netflix and Hulu, and cable-style streamers like Sling TV. With an extended viewing window and expansive DVR storage, it will feel a bit like a library-based service, but Frndly is tethered to more traditional channels and schedules.

Time will tell if this kind of streamer is workable in the changing television landscape, but if cable channels want to preserve part of their identity going forward, this might be the way to do it.