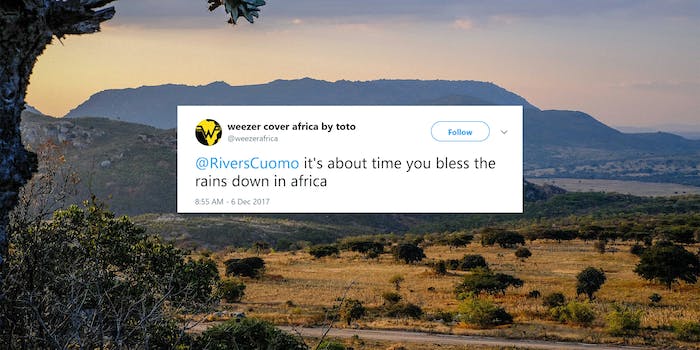 The internet can be a force for good, and for evil. And then there’s that nebulous area in between, where fans demanded that Weezer cover Toto’s “Africa,” and the rains finally came down.

Late last year, the Twitter account @weezerafrica appeared and suggested that Weezer cover the 1982 Toto single, which has become part of the internet’s rich tapestry. The account, allegedly run by a 14-year-old from Cleveland, tweeted at singer Rivers Cuomo in December, and after months of false starts—like the band covering a Toto song that isn’t “Africa”—and more fans jumping on the megaphone, they finally gave the people what they didn’t know they wanted.

@RiversCuomo it's about time you bless the rains down in africa

Is the song good? It kind of just sounds like Toto’s “Africa,” with a more robust ending. Still, the people are applauding its existence. As one commenter wrote: “Hard work and dank memes can truly get you places.”

And now we reckon with what this all means.

time to start holding people accountable for this https://t.co/l9t62N6U0c