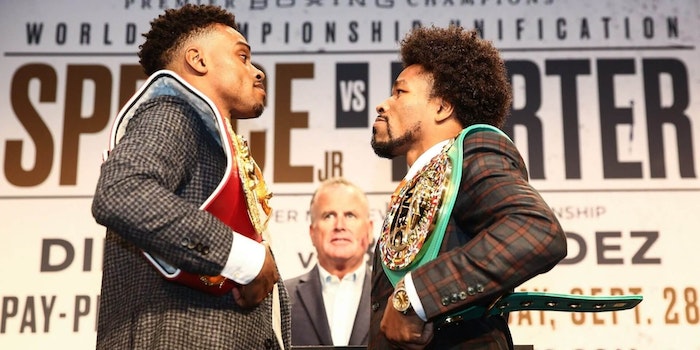 How to live stream Errol Spence vs. Shawn Porter

Two of the best welterweights are set to clash.

The last time Errol Spence was in the ring, he was fighting one of the best pound-for-pound fighters in the world. But Mikey Garcia was a 135-pound fighter moving up to Spence’s weight class of 147 pounds, and that size disparity showed as Spence blasted through Garcia to win a unanimous decision.

Spence’s opponent on Saturday isn’t necessarily one of the best fighters in the world. But Shawn Porter could end up giving Spence an even bigger test when the two meet on a Fox PPV card you can live stream on Saturday night.

Yes, Spence is a rather large betting favorite, but Porter is also a world titlist who has scored big-time victories before. In the meantime, they’ll unify two of the welterweight belts and try to give the fans an entertaining show.

“This,” TGB Promotions’ Tom Brown said during a recent media teleconference, “is really the type of fight that elevates the sport of boxing.”

Here’s everything you need to know to live stream the Spence vs. Porter fight.

Spence vs. Porter live stream: How to watch online

If you want to watch a live stream of Spence vs. Porter, you’re going to have to pay $74.99 for it. There is no legal way to take it in for free. But you also don’t need to have cable access to watch.

Aside from the four-fight card on PPV, you can also watch former featherweight world titlist Robert Guerrero take on Jerry Thomas and exciting junior middleweight prospect Joey Spencer battle Travis Gambardella on the prelims show on FS1, beginning at 7:30pm ET (you can also live stream those prelim bouts for free on the Fox Sports app).

Spence vs. Porter: Why it matters

Some boxing observers believe Spence (25-0, 21 knockouts) is the best fighter in the world. Others believe he’s not even the best fighter in the 147-pound welterweight division. Either way, it’s impossible to deny that Spence is an immensely talented fighter, and considering he’s a -800 betting favorite, meaning you’d have to wager $800 to win $100, not many people are picking Porter (a 5/1 underdog) to pull off the upset.

But make no mistake. Porter is a tough brawler who puts immense pressure on his opponents. There is, after all, a reason Porter has a 30-2-1 record (with 17 KOs) and holds a welterweight belt as well after scoring an impressive victory vs. Danny Garcia last year. He’s hungry for a new challenge.

“It’s how my dad raised me and it’s where I come from,” Porter said during a recent teleconference. “We were never allowed to shy away from any challenge, and that’s the way I’ve lived my life. So when it comes to taking on Errol Spence, to me it’s like taking on any other fighter. It’s not like taking on, as everyone has coined him, the boogeyman or the best welterweight in the world. To me I’m taking on another great, exciting fighter and I’m going to beat that great, exciting fighter.”

Not many agree with him, though. While Porter certainly has skills and has a successful blue-collar approach to his boxing style, Spence is a special boxer. While the boxing world hungers to see him face fellow 147-pounder Terence Crawford, also one of the best pound-for-pound fighters in the sport, Spence is merely aiming to look spectacular on Saturday.

“One of my goals in this fight is to knock him out,” Spence said. “I’d be the first person [to do that], and that would make it a real statement. I’m ready to go in there and deliver. I want it to be a great knockout.”

According to one high-profile boxing trainer, that kind of sterling performance is exactly what Spence needs to take his career to a different level.

“I believe that if Spence is a dominant welterweight, he needs to go out there and dominate Porter,” Johnathon Banks, the trainer for Gennadiy Golovkin, told the Daily Dot. “That’s my opinion. If he wants to be taken seriously, he needs to dominate this kid. Shawn Porter is a rough fight for anybody. He’s a little tougher than he is skilled. Both guys are good guys, but Spence is the one who’s making the biggest noise right now. If he wants to be taken as a threat to Terence Crawford, he needs to stop this kid.”