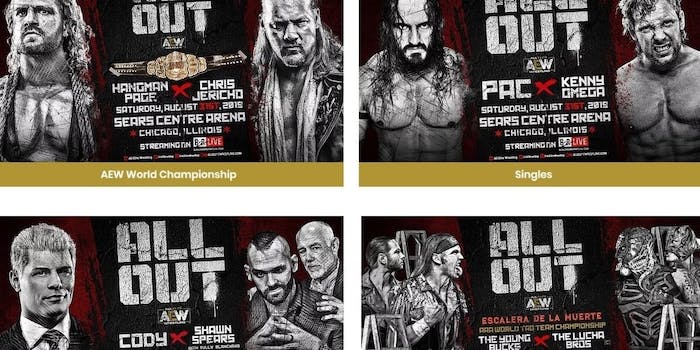 How to stream AEW’s All Out

Come see why AEW is the hottest wrestling company in the world.

A little more than a month before All Elite Wrestling goes completely mainstream and begins its weekly cable show on TNT, it’s trotting out some of its biggest superstars to tear each other to pieces in the All Out PPV. And you can stream what’s become the world’s hottest wrestling promotion on B/R Live.

If you’re a wrestling fan who’s tired of WWE, or you just like the idea of watching a hungry promotion trying to claw its way into widespread relevancy, this is for you. AEW is led by founder and executive vice president Cody Rhodes, who is a former WWE wrestler, the son of the legendary Dusty Rhodes and the younger half-brother of Goldust.

Saturday night’s event should have plenty to get you excited, especially since the first official AEW world heavyweight champion will be crowned there. The title match will feature superstar Chris Jericho, the first-ever WWE undisputed champion and a two-decade legend, vs. Hangman Page. Jericho is coming off a victory over Kenny Omega at Double Or Nothing in May to get into this position, while Hangman Page was victorious at that event’s Casino Battle Royale to earn his shot.

In the leadup to Saturday’s match, Jericho remembered a story about how he, as a young wrestler, was once told not to disrespect the veteran wrestler he was facing by calling him an “old man.”

“I was doing a program with a guy called ‘Bulldog’ Bob Brown,” Jericho told reporters, via Wrestle Zone. “He was probably 50 at the time, I was around 19 or 20, and he seemed like he was 100. Miserable prick, not a good guy, and not a particularly great worker, but he was the boss. I did some kind of promo like, ‘Hey old man, I’m going to beat you up…’ and he said ‘Come here and let me tell you something. If you call me an old man and I beat you—and I’m going to beat you—you got beaten by an old man. You’ve got to go out there and let this person know that this person is a tremendous performer.’”

So, Jericho, at the age of 48, has been building up his young up-and-coming opponent.

“We have a job to do at All Out to put on a great match, which we will, and to make Hangman into a bigger star and to make me the first AEW Champion, which is the only way it’s going to go,” said Jericho. “If it doesn’t, where do I go from here? If Hangman Page beats me, what do I do? You get one chance to make your way up the ladder and you lose, you don’t get another chance, you go back to the bottom. Helter skelter, you go back to the top of the slide, so I have to win.”

In other matches, Kenny Omega will meet Pax, Cody will face off vs. Shawn Spears (who will have wrestling legend Tully Blanchard in his corner), and the Young Bucks will battle the Lucha Bros for the AAA tag team wrestling titles.

Here’s everything you need to know to watch the AEW All Out live stream. 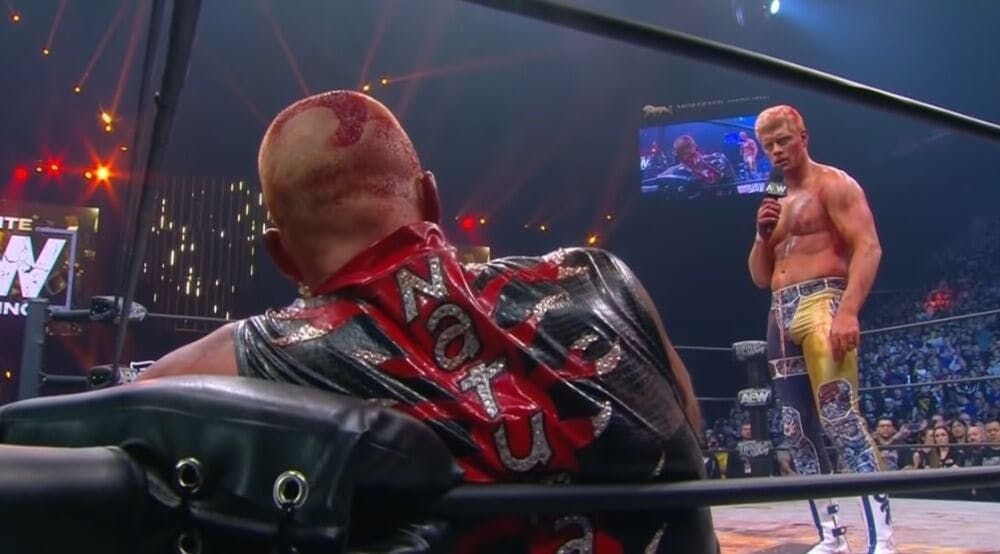 All Out live stream: How to watch online

The only legal way to watch the AEW All Out PPV is through B/R Live, the Bleacher Report website’s live streaming service, showing everything from international soccer tournaments to national lacrosse events. It also broadcasts replays of the Dan Patrick Show and the Rich Eisen Show, along with events from Singapore-based MMA promotion ONE Championship.

Since Saturday’s AEW show is a PPV, there’s no legal way to get around the $49.99 fee to watch the card. And though spending $50 on a one-time pay-per-view event is pricey—especially since you can spend $9.99 per month to subscribe to the WWE Network and get all 14 of their annual PPVs included in that price—this is the second time AEW has used this price point. As the Big Lead wrote in May, “That [price] is going to be a very tricky proposition for drawing the casual audience.”

AEW, though, is offering two matches for free on B/R Live during its The Buy In pre-PPV show that begins at 6pm CT. During that free hour of action, the winner of the Casino Battle Royale will earn a shot at the women’s world title, while Private Party will face Angelico and Jack Evans in a tag-team matchup.

All Out fight schedule