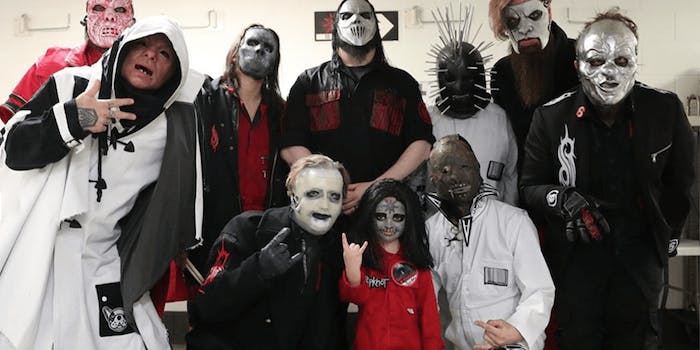 The 5-year-old also got to go onstage with the heavy metal band.

A British 5-year-old got to meet the members of heavy metal band Slipknot after going viral for drumming to the group’s music.

The saga began just last week when the boy, named Caleb, was filmed at a Slipknot show perfectly air-drumming to one of the band’s songs.

This little kid is 5 years old, didn’t miss a beat all night. So sick! pic.twitter.com/RU2GJWdVPJ

The video racked up millions of views and even caught the attention of the band’s drummer Jay Weinberg, who retweeted a copy of the video as well.

If that wasn’t cool enough, the young music prodigy went viral once again when a video of him drumming on an actual kit began making the rounds as well.

While dressed as former Slipknot drummer Joey Jordison, Caleb banged out an impressive rendition of the track “Before I Forget.”

The video’s top comment came from Jordison’s girlfriend Amanda, who applauded Caleb’s skills and offered to connect the boy with his drumming hero.

But it gets even better. The band proceeded to invite Caleb to a show in Birmingham on Jan. 24, where he was brought on stage after meeting his musical idols.

A post on Instagram from Weinberg, the band’s current drummer, shows numerous pictures and videos of Caleb throughout the visit.

Decked out in clothes matching Weinberg’s, Caleb was able to play the drummer’s kit, throw drum sticks into the crowd, and chill with the whole band.

“It was such a blast inviting this young shredder Caleb to last night’s show in Birmingham,” Weinberg wrote.

Weinberg even convinced the company SJC Custom Drums to hook the kid up with new equipment as well.

Caleb’s mother, who runs a Twitter account for her son, thanked the band profusely for their generosity the day after the concert.

“Yesterday was the most amazing experience for Caleb! We can’t thank @jayweinbergdrum @slipknot @SJCdrums enough for the whole experience!” she wrote. “Dreams definitely came true yesterday & memories that will last forever.”

Incredibly enough, this isn’t even Caleb’s first run-in with fame. When he was only 4 years old, Caleb made headlines when he drummed to a Foo Fighters song on the stage at the U.K.’s Solfest.