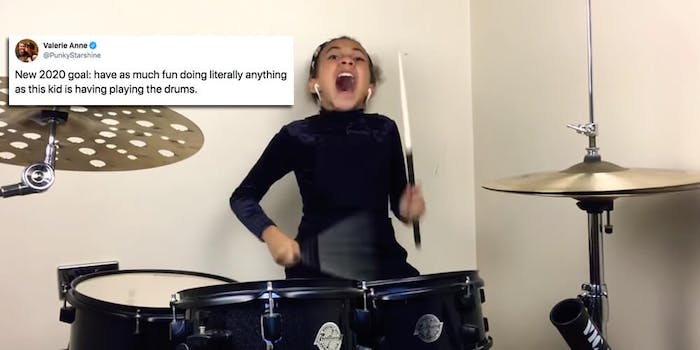 'North West said she was TIRED of Sunday Service.'

The internet’s new favorite sensation is a 9-year-old drummer from Ipswich, England. If you aren’t already acquainted with this mini rock ‘n’ roll queen, get ready to find out why we’re already seeing a slew of Rolling Stone covers in her future.

Nandi Bushell may be young, but she’s already spent over a third of her life playing the drums—and she’s better than a lot of adults who clumsily try to pick up the ‘sticks. But what really sets Bushell apart from everyone else, regardless of age, is how joyfully enthusiastic she is while playing. Specifically, in a recent video of Bushell taking on Nirvana’s “In Bloom,” how that enthusiasm translates into actual screams.

Bushell has already had quite the blooming music career before this viral success, though. Her parents have been posting videos of her drumming to the social media accounts they run for her since she was only 6 years old, and she already had the opportunity to jam out with one of her faves, Lenny Kravitz.

Today I had the most beautiful experience playing with a young drummer I saw on Instagram named @Nandi_Bushell. You are inspiring and I look forward to seeing you shine in the future. Love and respect. pic.twitter.com/wR1b9rTaGJ

She also got to show off her mad skills in a Christmas advertisement for British retailer Argos that premiered in early November.

I am so excited to show you my new Christmas advert for Argos. I hope it warms your hearts. I had so much fun making this advert with @omar_abidi (screen dad), Brad my tutor, @theandpartnership and @argos_news. I love the #simpleminds #argos #bookofdreams pic.twitter.com/h1pBSfxtd9

While Bushell has held a captive audience for quite some time, this now-viral video has brought her scores of new fans–and it’s also brought her ever-so-contagious joy to so many people, just in time for the holidays.

“New 2020 goal: have as much fun doing literally anything as this kid is having playing the drums,” Twitter user @PunkyStarshine wrote.

Another joked that “North West was TIRED of Sunday Service.”

That’s exactly how drums should be played! pic.twitter.com/DldHj50VZ6

This girl is today's Amazing Thing. The fact that she appears to be playing with MASSIVE CARVING KNIVES is an energy I can appreciate. https://t.co/Dwx2Jy9mm9

Ordering a drum set for my office, for self-care purposes…

The yelling is the best! Everyone should scream like that when they’re playing their instrument.

I cast a Patronus charm and she appeared… https://t.co/0cElr8gRFX

This is the first thing I've seen in ages that makes me think rock music might have a future after all. Because this kid ROCKS. https://t.co/sz4VGEieWZ

New 2020 goal: have as much fun doing literally anything as this kid is having playing the drums. https://t.co/Ykd7IbZml4

While it may take a few more years to catch Bushell rocking out as part of the next Foo Fighters or Rage Against the Machine, we at least have all her amazing covers to rock our socks off in the meantime.

But whatever she decides to do in the future, may little drummer girl be a constant reminder to us all that we should find something we enjoy the hell out doing. And maybe, like Bushell, we’ll even get to be good at it.