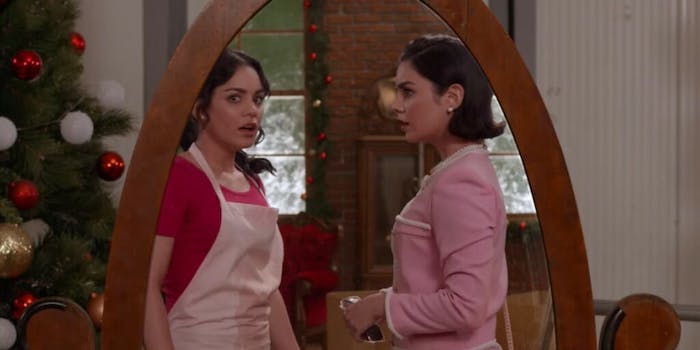 The streets are freaking out in anticipation.

Netflix released a trailer Wednesday for its latest Hallmark-esque Christmas movie, The Princess Switch, and people on Twitter are freaking out. Vanessa Hudgens plays two different characters—a Chicago baker entering a baking competition in the fictional country of Belgravia and the princess of that country.

The lookalike princess and baker naturally decide to switch places and end up falling for each other’s respective men. The whole thing sounds incredibly cheesy and wonderful.

People on Twitter are absolutely thrilled to see Hudgens going back to her roots of wholesome TV movies. One person even pointed out she looks similar to her character from High School Musical.

“She literally looks like Gabriella from HSM with the outfit what even,” they wrote.

Others said the plot reminds them of another Disney movie. “Vanessa Hudgens’ new Netflix holiday movie, ‘The Christmas Switch,’ sounds like the 2000 Justin Timberlake-Maggie Lawson classic TV film, ‘Model Behavior.’ Except with royalty. And Christmas,” one person wrote. “Bless you, Netflix.”

Most people are just excited that another Netflix Christmas movie has been added to the lineup. “If Netflix thinks I’m gonna spend a night watching cheesy Christmas movies in November then THEY’RE FUCKING RIGHT!” someone on Twitter said.

Luckily, fans won’t have to wait long. Get your blankets and popcorn ready—The Princess Switch hits Netflix on Nov. 16.