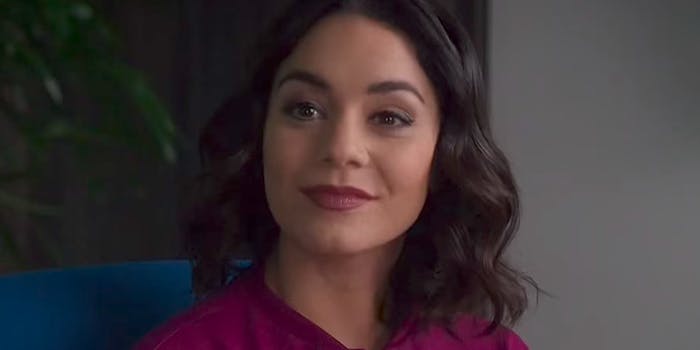 Wildcats everywhere have been going through a whirl of emotions.

Wildcats everywhere have been going through a whirl of emotions these past few days, after a video appeared to show a 10-year reunion of the original Disney cast coming together for a High School Musical 4 film, titled Once a Wildcat: A High School Musical Story. We were fools for believing.

Sure, the trailer rarely showed any of the cast members in the same shot. And yeah, the clips were from different movies, but it kind of looked like a legitimate production when we saw it trending on YouTube…

WAIT. There's going to be a High School Musical 4 AND THE ORIGINAL CAST IS IN IT?!!!!! pic.twitter.com/fIxTahEEQI

Sadly we had to wake up from our dreams and face the reality that it was a fan-made video, uploaded in July: Zac Efron, Vanessa Hudgens, Ashley Tisdale, Lucas Grabeel, Corbin Bleu, and Monique Coleman aren’t getting back together on-screen anytime soon.

Me when I realized that high school musical 4 is only a rumor #HSMReunion pic.twitter.com/fkEzgqOoxu

TO WHOEVER MADE THAT FAKE HIGH SCHOOL MUSICAL 4 TRAILER: yOu ARE THE WORST & YOU GOT MY HOPES UP AND NOW I'M SAD

There's a place in hell for whoever made that fake high school musical 4 trailer.. getting all our hopes up like that

Finding out that the high school musical 4 trailer is fake has ruined my day. At least we're all in this together. #hsm4

While many fans were devastated, some appreciated the trailer for at least bringing back the Wildcat feels they thought were gone.

There is a High School Musical 4 in the works, but it’s believed to be based on a new generation of Wildcats. For now, you can cherish the fake trailer and live in denial.