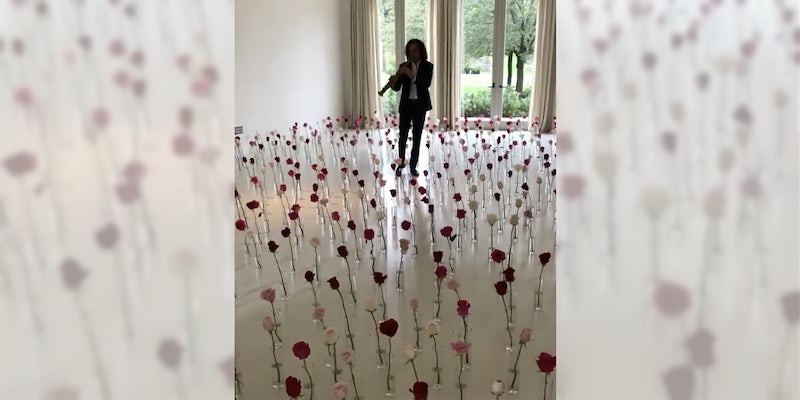 This setup is as precarious as love.

It will come as no surprise that Kanye West went all out for Kim Kardashian’s Valentine’s Day present this year.

“NO BIG DEAL KENNY G IN MY LIVING ROOM!!!” Kardashian tweeted Thursday. The accompanying video showed famed saxophonist Kenny G apparently trapped in a land mine of roses in vases while he played jazz in the Kardashian-West household.

The clip begs a few questions: Did Kenny G have to stand there while the roses were placed? Or did he tip-toe carefully around them to get to that spot? And if that’s the living room, where is the furniture?

But those are minor details, and the real story here is that West’s grand Valentine’s gesture puts any of your romantic holiday plans to shame. And of course, the whole ordeal has inspired memes and jokes on Twitter.

if it's just Kenny G in ur house and all the furniture is gone, that's a break in

Kanye West’s gift to his wife was to capture Kenny G and hold him in a room of their house. He is forbidden from taking breaks and must remain standing, playing his romantic sax. If even a single vase of roses is overturned, an alarm will sound… pic.twitter.com/rpPGTq8yZz

You might be romantic but you’ll never be Kanye filling a room with roses and actual Kenny G romantic https://t.co/aqE23Z89IW

This reaction shot of West is particularly hilarious. Seriously, what’s he thinking?

when you're only 80% sure you hired Kenny G to come to the house but ok pic.twitter.com/fOQQvLISY5