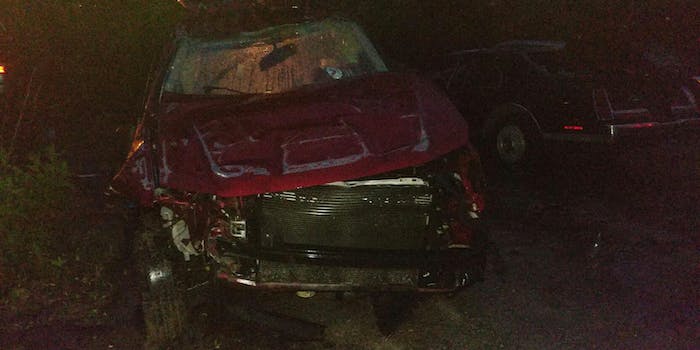 The streamer says he is 'All in all, still in good health.'

Streamer Staffsgtkiba captured the terrifying footage of his own car crash while storm chasing live on Twitch.

Staffsgtkiba was on the trail of tornadoes in Missouri that tore through several states on Tuesday. The streamer says he “was staying on the backside to help search and rescue.” Storm chasing, like a variety of niche outdoor activities, has found a dedicated audience on Twitch.

In the harrowing footage, Staffsgtkiba begins to hydroplane while driving across a bridge due to the heavy amounts of rainfall on the road. The streamer quickly loses control, avoids colliding with any nearby cars, but is seen heading directly toward a concrete barrier on the side of the bridge. The streamer later said that the impact with the barrier didn’t stop his car and he rolled two times after the initial crash.

Staffsgtkiba uploaded pictures of his car after the accident onto the public Discord server for his Twitch channel. Although the vehicle appears totaled, the streamer claimed it “was still running when we stopped” in addition to posting the pictures.

Despite the shocking footage and demolished-looking state of his vehicle, Staffsgtkiba assured his safety shortly after the crash in a followup stream of the game Apex Legends. “Nothing broken, nothing sprained, just a little bit of blood from my hands,” said Staffsgtkiba. ”All in all, still in good health,” the extremely lucky streamer added.