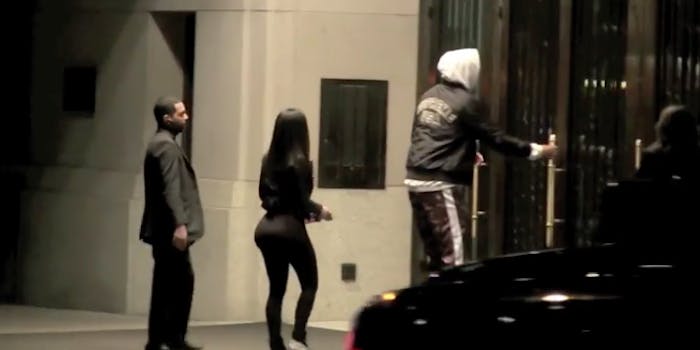 After reports that NBA player Tristan Thompson has been cheating on the 9-month-pregnant Khloe Kardashian hit Twitter on Tuesday, an Instagram model has reportedly stepped forward with (and then quickly deleted) receipts.

The saga started Tuesday when tabloids reported that the 27-year-old Cleveland Cavalier was seen making out with a “mystery brunette” in New York City over the weekend. Hollywood Life reported that a source close to Kardashian said she “is devastated and has been brought to tears after seeing the pics of Tristan with another woman.” Kardashian is no stranger to being publicly cheated on—her NBA player ex-husband Lamar Odom had similar problems with fidelity that ultimately ended their marriage—so her fandom quickly rose to her defense on Twitter.

Now TMZ is reporting that a model who was using the handle @ms.stephaniee_ posted “a sex tape and a number of raunchy text messages” allegedly with the NBA All-Star to her Instagram story Tuesday evening.

The account has since been deleted, but according to TMZ, @ms.stephaniee_ claimed she is the woman who was filmed walking into the Manhattan Four Seasons with Thompson Saturday evening. TMZ says that “Tuesday night she filled her IG story alleged texts from Tristan and a video of a couple having sex… which she claims is her and Tristan,” though “neither of their faces is visible in the short clip.”

Many other outlets are alleging that another Instagram model, Lani Blair, might be the brunette in question. Paparazzi caught plenty of clear shots of the pair outside the hotel:

Thompson and the woman reportedly spent four hours together in the hotel before they emerged with Thompson wearing a different outfit.

No matter who the mystery brunette ends up being, this likely won’t end well. For the time being, though, it appears Khloe and Kim are still following Thompson on Instagram.